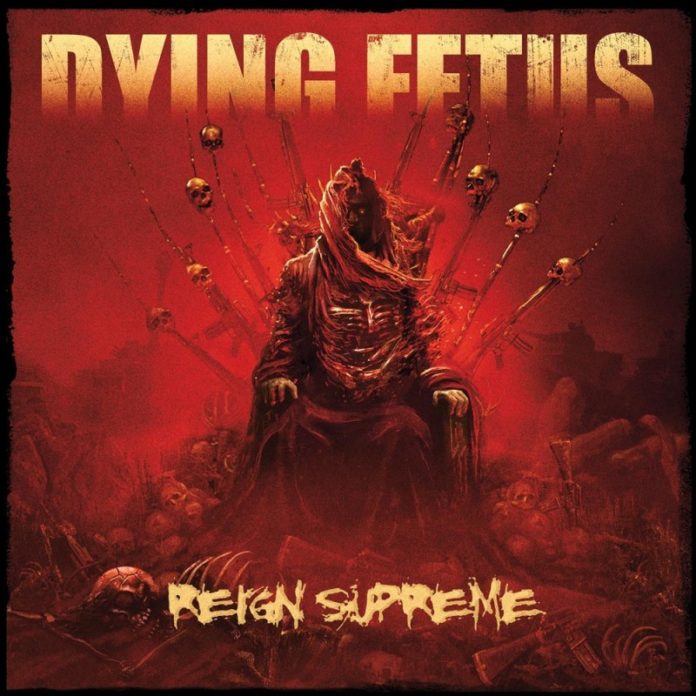 For years Dying Fetus has always been at the top of the death metal pedestal for releases such as “Killing On Adrenaline“, “Destroy The Opposition“, and “Descend Into Depravity“. Each of those albums has a distinct progression in musical style, and once the band released ‘Subjected To A Beating’ to the public a while back I could easily tell that “Reign Supreme” was going to be very much in the same vein of “Descent Into Depravity“. The only issue I had with that revelation is I didn’t care for ‘Subjected To A Beating’ too much. There was just something about it that couldn’t draw me in, but I knew at the same time that basing an opinion off of one song was not a smart thing to do. So, I waited until Relapse Records provided me with a copy, and I feel that after the several rotations this disc has made, I can fairly give my opinion on the brand new Dying Fetus album, “Reign Supreme“.

John Gallagher and Co. have always been able to provide some seriously destructive music over the years, but even with the short-and-sweet beginning track of ‘Invert The Idols’ I could tell that I was in for something much more cataclysmic. The second track is the one I talked about not liking, ‘Subjected To A Beating’. Now, I’m not sure if it’s because I know the song has a full album behind it, but for some reason my opinion of ‘Subjected To A Beating’ did a complete 180 degree turn. It isn’t the greatest Dying Fetus song ever, but it was quite enjoyable over the five times I have listened to the album since. So far, so good.

The groove that Dying Fetus has been known for over the years is in quite an abundance on “Reign Supreme“. Every single song is packed full of it, and when you combine it with the John Gallagher’s tectonic growling, Sean Beasley’s pitbull barking, and Trey Williams’s stellar drumming then that is something you just cannot beat. Tracks such as ‘Second Skin’, ‘From Womb To Waste’, ‘In The Trenches’, and ‘Revisionist History’ (my personal favorite) are the four stars on “Reign Supreme“. The musicianship of all three men is perfect from beginning to end, but a real special mention has to go to Trey Williams. I still can’t believe he was languishing away as an unknown drummer in Maryland before Dying Fetus picked him up, because his performance on “Descend Into Depravity” floored me, but he has clearly outdone himself on “Reign Supreme“.

The production of this album is ridiculously good. There is no way you would be able to guess that only three people were involved with the instrumentation of it. The only problem I have with it is that while you can hear Sean’s bass during the higher tapping notes, he is buried underneath the rest of the onslaught that John and Trey put out.

This review is going to be pretty short, mainly because while every single song has its own identity, Dying Fetus is clearly enacting what I have for years been calling the Bolt Thrower Effect©. This means that if a band has found a working formula that is devastating in every sense of the word, then why not just keep doing what you’re doing? If you were a fan of Dying Fetus‘s last output, then there is absolutely no reason why you shouldn’t go out and grab “Reign Supreme“.