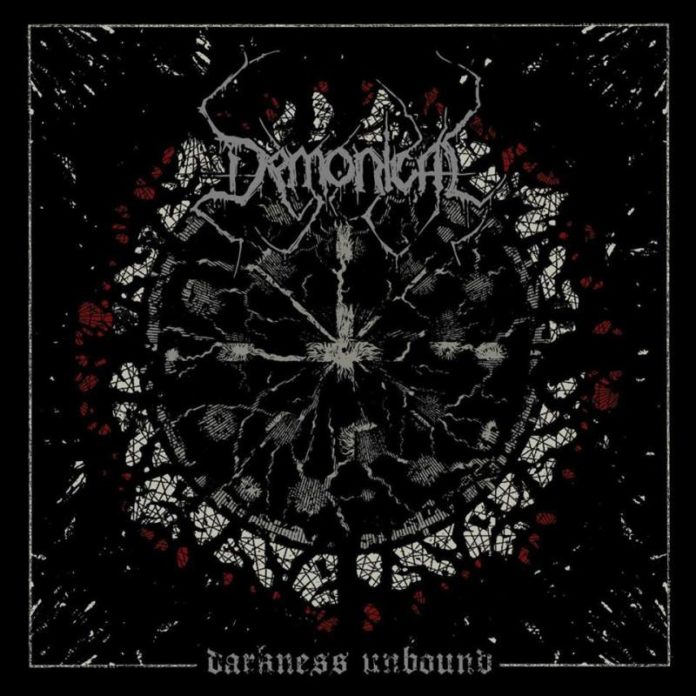 If there’s one thing I’ve learned from reviewing various metal releases it’s that I never get tired of good old-fashioned death metal. Ever. Sure, some albums are better than others, with some being bland while others fantastic. Darkness Unbound by Demonical falls somewhere in between the two, pretty good but missing that little *oomph* that would put it over the top.

The hardest part about trying to convey my thoughts on Darkness Unbound is that it’s such a bog-standard death metal album that it’s a bit difficult to find different aspects to talk about. The riffs are certainly there; songs like “An Endless Celebration” and “King of All” will pummel you with a variety of different styles that blend together very well. There’s even a little black metal influence, although you might have to pay extra-close attention to notice any. Really though, Demonical‘s latest offering is, for the most part, an unapologetically straight-forward affair. It doesn’t seem like Darkness Unbound was trying to be a throwback album though, which is at least a little refreshing in today’s “Back to the roots!” metal culture.

I’ll also point this out: the guitars on Darkness Unbound really help save the rest of the album from total mediocrity. Some of these riffs are just catchy and great; they really help put into perspective how bland most of the drumming is. This seems to be a running theme in many of the death metal albums I’ve reviewed these past few years, just what makes drums so hard to make interesting? Fuck if I know, but chalk Darkness Unbound as another album to have stellar guitars paired with so-so drumming. At least the vocals fair a bit better, showing some impressive range during a few songs, especially “The Great Praise”. The album has a fairly cohesive flow to it, you’ll never really be surprised with tempo or stylistic changes between songs but things manage to stay relatively fresh throughout (probably helped along a bit because the entire album is just over a half hour long).

If you’re itching for some new tunes, you could do a lot worse than Darkness Unbound. You probably shouldn’t expect it to stay in your rotation very long, though. It’ll wear out it’s welcome pretty quickly.