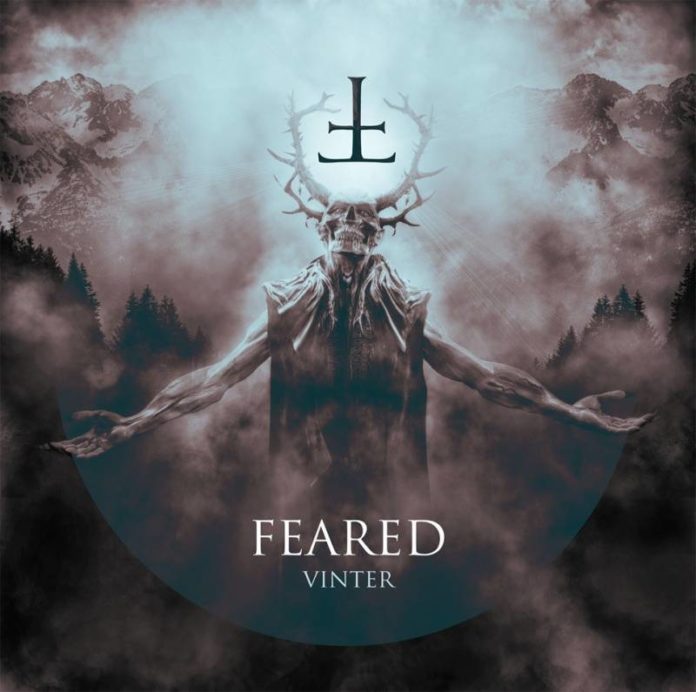 I can honestly say that I have never been any less surprised than when I discovered that Feared come from Stockholm, Sweden. Despite being a very young band,  they have mastered that modern Swedish Death Metal sound quite well; heavy, downtrend riffs accompanied by the occasional harmony, appropriate use of background synth, drumming you could probably set your metronome by and a wide range of vocals, often with multiple layers.

The riffs are a real strong point in Vinter, since at points they sound a little like Nevermore, particularly when it comes to the, subtly complicated, chugging rhythm sections. These are complimented nicely by many tremolo picked verse riff melodies to really break up the album… Something that a lot of bands forget when they decide they want to be heavy by making a song entirely consisting of breakdowns.

Continuing with the Swedish sound, the influence of bands like Scar Symmetry, Soilwork and In Flames is really quite obvious throughout, although this isn’t a negative thing. Feared have managed to put out a record where they are able to mix this type of sound with slightly heavier elements (like parts reminiscent of thrashers Face Down) coupled with some real technical genius. As much as the band may sill be in the stages of infancy, it’s immediately clear that some of the members have been around the block a few times, playing in a multitude of great bands prior to this like Clawfinger, Chimaira, The Haunted and Six Feet Under.

Perhaps the best part about Vinter is the lyrical content of their songs, comprised of short narratives about the fears of society, a refreshing and fairly original concept. Take “Needle Effect”, for example, a song that (as it is obvious) deals with drug addiction; while the song itself has a real dirty and dark feel, it isn’t until you realize that you’re actually listening vocalist Mario Ramos pretending to be a junkie begging for another fix that the power of this track really hits home. I’m really impressed by the original concept of the lyrics and the depths that they are willing to plumb.

It’s tragic, but almost typical of the music industry, that Feared are currently unsigned and doing self-releases; this is truly shameful, as these guys really deserve to get picked up soon. Amazingly enough, since the last album the members have been drafted into even more bands and yet they haven’t slowed down, working themselves silly writing, recording, mixing, mastering and releasing this fine new record. Bands as hardworking as Feared deserve the spotlight far more than those bands that rely entirely on the publicity that ‘Metal Magazine’ or whoever can generate for them just by reiterating that they WILL be the NEXT BIG THING.

Until these guys manage to break out of the shadows, grab a copy of this album, enjoy it and appreciate that there are some bands out there who still work fucking hard to play the music that they love as much as they can physically manage.