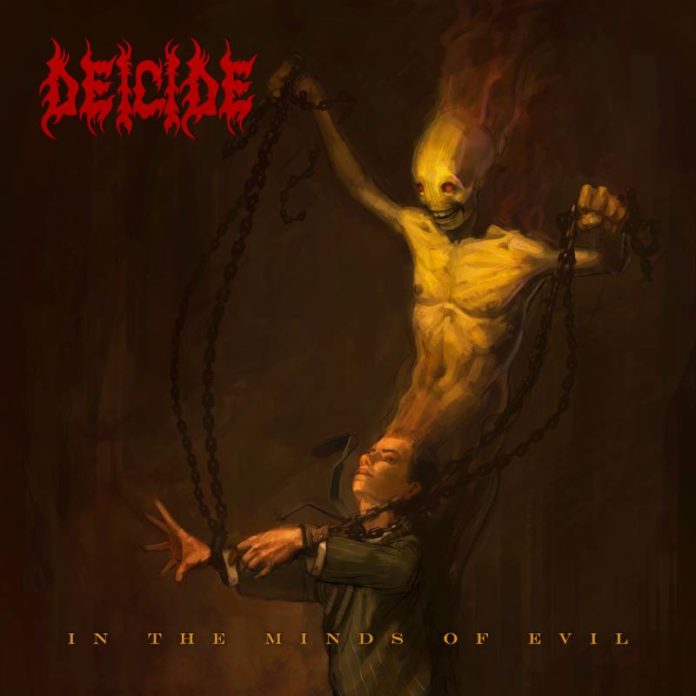 Next to Cannibal Corpse, Deicide are pretty much the biggest name in Death Metal… especially after Morbid Angel shat out their last record. With classic albums like Once Upon The Cross and Legion, you’d be forgiven for thinking that In the Minds of Evil was going to rip your nuts off; Well, I hate to disappoint you all but that’s almost certainly not going to happen. Everything Deicide have ever done has impressed me in one respect or another, up until this album. Stench of Redemption for example, even though it wasn’t the best album ever, still packed some really furious bits and the lead guitar work was absolutely impeccable. This time, however, Deicide seem to have decided to just dumb down the sound, with a guitar tone that is practically flat, and a production about which we can only praise the drums, as they still sound fantastic and are performed exceptionally. Of course Glen Benton‘s vocal performance is top notch, with his multitude of different styles layered one on top of each other. It’s just a shame that these performances can’t really save this record from becoming pretty stale at an alarming pace.

The first two tracks of the album are jammed with some thrash riffs that’ll get your head moving. but after that it just slowly fades out into stagnancy. Everything is a bit more commercially accessible with this record. which may work for some but for me it just loses a lot of the aggression in the chunky riffs (especially when you compare it with classics like ‘Dead By Dawn’). Deicide‘s lead work has suffered a bit over the last few albums, but I guess that can be forgiven as they have been changing members left and right; perhaps this is also to blame for the lack of continuity in quality and the forced, disjointed feeling that some of the tracks give.

If I’m honest, the whole Pro-Satan, Anti-Christian thing is getting pretty old now. I have no sympathies towards either side, but it’s just getting dull hearing about it over and over and over again. We get it Glen; Satan is good, God is bad. We’ve all seen that inverted cross you’ve burned into your face and we are all well aware of how you feel. Please either get new subject matter or at least try and present it in a slightly different way, there are only so many times you can recycle the idea of ‘Godkill’, ‘Kill The Light of Christ’ or ‘Trample the Cross’ into something that isn’t utterly tedious.

While it seems I’ve said a huge amount of bad things about this album, it’s not a bad album per se. It’s just not up to par with the band’s previous work, and will probably disappoint the more hardcore fans. There are enjoyable parts in this record, and the Deicide sound is still there… it’s just that it just sounds way too watered down for me.

…Can’t say I was hugely impressed with opening the album using a quote from The Dark Knight either.