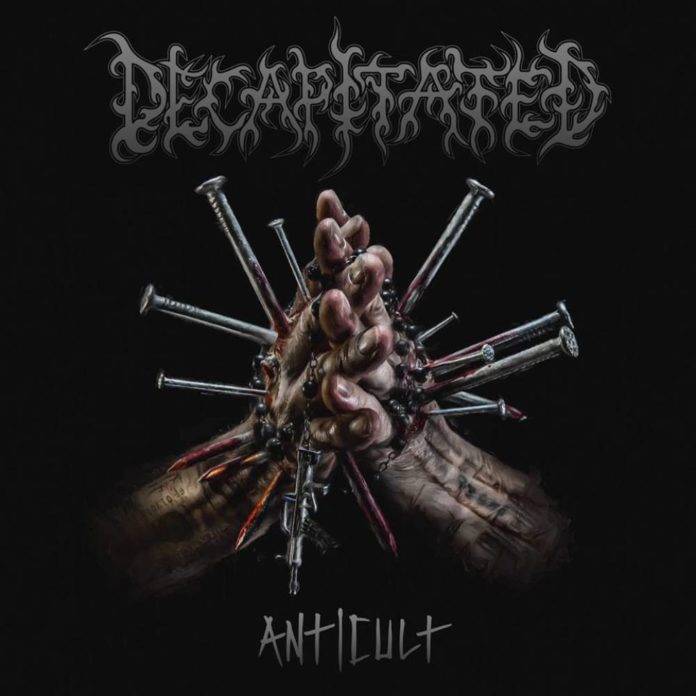 Poland has produced some of death metal’s biggest bands over the years, with Vader, Hate, and Behemoth being three of the longest-lived in the genre. Although, compared to those three, Decapitated are relative newcomers to the genre, they have produced some of the most celebrated albums in the technical death metal genre, namely Winds of Creation, Nihility, and The Negation. Tragedy struck in October of 2007, however, when an auto-collision left vocalist Adrian Kowanek and drummer “Vitek” injured; Vitek quickly succumbed to his injuries, and Adrian went into a coma, effectively putting the band on hiatus. Sole remaining founder of Decaptitated, guitarist Vogg reformed the band in 2009, and began recording and touring again.

This year’s Anticult marks the third release from the reformed Decapitated, and a continued push into a more groove-oriented sound. During the band’s first era, the final album Organic Hallucinosis hinted at things to come, so the change in direction isn’t exactly out of left field, but if you were to listen to Anticult alongside Nihility or Winds of Creation, you wouldn’t be faulted in thinking it was two different bands. Anticult sounds almost like a mix of the newer material by In Flames and Meshuggah, with hints of melody and atmosphere coupled with groovy, mosh-ready riffs and barked vocals. “Impulse” starts off with a somewhat eerie guitar bit, before being thrown into a chuggy, mid-paced riff and guttural, yelled vocals. With breakdowns and more melodic, almost “Gothenburg-esque” rhythms and chord progressions, nearly all semblance of the early tech-death sounds that put Decapitated on the map are gone. While I like seeing bands think outside of the box, try new things, and generally change up their formula, this is such a drastic difference from their early material, I almost feel Decapitated should have gone with a name change, particularly since Vogg is the only original member, and isn’t even really playing the same kind of stuff.

While the riffs aren’t bad, they also aren’t exactly anything new; “Kill The Cult,” for instance, sounds like just about anything you could have heard on a DevilDriver album over the last 10 or so years. “Never” has some pretty cool moments, particularly during the first solo; the lead guitar is super melodic, and soars over an arpeggiating riff that gets repeated later in the song. Moments of brilliance like this show that Vogg still has a few tricks up his sleeve, but the overall album just doesn’t feel like a Decapitated record. Probably the most disappointing aspect of all this isn’t that the band aren’t exactly playing death metal anymore, it’s that what they ARE playing has been done many, MANY times, and done better. If I’d never heard anything by As I Lay Dying, Shadows Fall, or All That Remains, I might be a little more excited by tracks like “Earth Scar.” As it stands, though, Decapitated have come off sounding more like an Americanized version of Scandinavian melodic death metal, which is gut wrenching, considering how influential the band’s early work was.

The production is as excellent as ever, with a heavy emphasis being placed on the guitars, which is to be expected with Vogg being the veteran member, and chief songwriter. The overdubs on the guitar work aren’t overbearing; while there are plenty of layered guitars, there doesn’t seem to be a ridiculous amount of them. The vocals are also given a pretty big boost in the mix, as well as the drums and bass, but Anticult is really centered around the power of the riff. If you’re a fan of melodic death metal, groove metal, or metalcore, you’ll probably find a few things to enjoy about this album, but for long time fans of Decapitated, this might prove to be a bumpy, and ultimately disappointing ride.