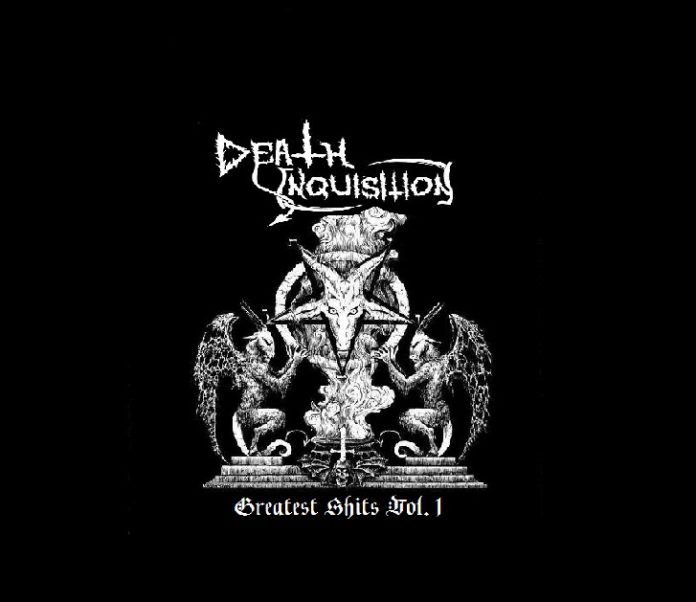 Hailing from Oklahoma, Death Inquisition attempt to give the people a hard-hitting mixture of thrash and heavy metal, and seem to have a decent following in the Tulsa underground.  The majority of this band seems to be in their very early 20s, and obviously grew up listening to far too much Venom, Slayer, Black Sabbath, and Metallica.  With a title like “Greatest Shits, Vol. 1” it shows that this band doesn’t take themselves very seriously, and would rather have fun and jam at a show, so you have to hand it to them for that.

Unfortunately, that is one of the only good things I can say about Death Inquisition at this juncture.  I have listened to “Greatest Shits, Vol. 1” multiple times, and each cycle felt like a bigger chore than the last.  I am going to get this out of the way and say that this demo has a very rough production, but that is in no way what I dislike about it.  The real deathblow to “Greatest Shits, Vol. 1” is the lack of interesting song-writing.  It seems that four-of-the-five songs have no real direction to them and rely on the same riffs and drum patterns repeatedly, showing no real growth.  The only songs that I remotely enjoyed were ‘Proliferation’ and ‘Reaper of Faith,’ but unfortunately for me the vocalist is unable to hit any of the high notes he has given himself or keep his tone intact.  Think of a mixture of King Diamond and Steve ‘Zetro’ Souza, but without the intensity or astonishing falsetto.

Even though this release is pretty bad, I will not condemn Death Inquisition as a whole, and only do so with the material that is on this disc.  The reason I say that is the vocalist moved to rhythm guitar (praise be to Allah) and they added a new vocalist to the mix.  I haven’t heard material done by him yet, but Death Inquisition are a young band and they have a lot of growing to do.  If I were you I would just skip “Greatest Shits, Vol. 1” and wait for some new material to come out.  Until then, I won’t completely write off Death Inquisition, but boy have they set the bar low for themselves.  I also give “Greatest Shits, Vol. 1” the award of “Most Honest Album Title Ever.”