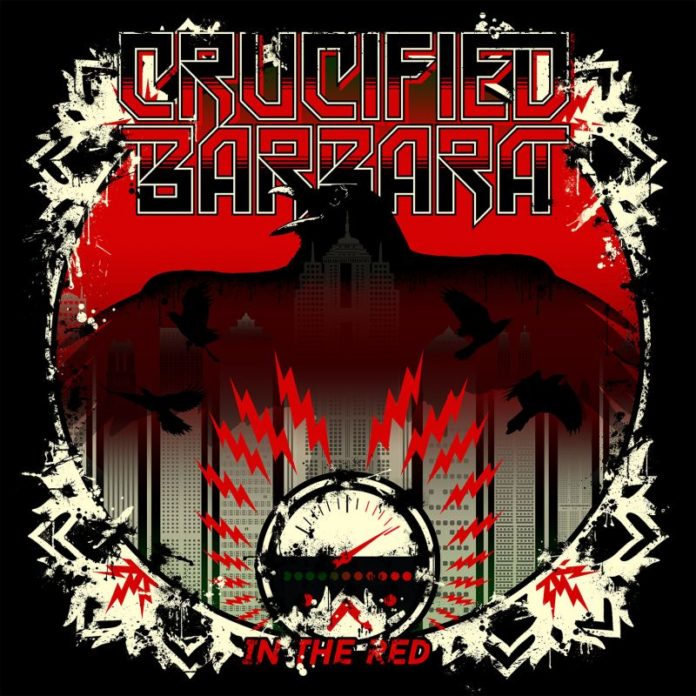 Prior to this release my knowledge of Crucified Barbara was very limited. By that I mean that I knew they existed and that I had heard somewhere that they were a hard rock band. I think that, in the long run, this ignorance paid off, because it really allowed me to be blown away by their music.

When tackling a release by a “female fronted” band (a moniker I fucking loathe), part of me is always worried that what I’ll encounter is something in the vein of Butcher Babies, Huntress, In This Moment, or any of the assorted garbage that has been popping up lately, using their female performers not so much as an asset but as a gimmick. After all, in a world where women are objectified more than enough, seeing this crap exploited in heavy metal, a “scene” that is supposed to go against that type of social conventions, has been a source of annoyance.

Although I don’t want it to sound like I’m vetting Crucified Barbara as “one of the good ones”, I’m sure that my words can be misconstrued that way. After all, I was apprehensive about what I was going to find here, which perhaps says a lot about my own relation towards to presence of women in heavy metal. Still, as the metal recording industry has seen it fit to exploit more and more women as eye-candy instead of performers, I’d like to think my apprehensions were justified.

Having said all of this, let me be clear, Crucified Barbara are not a good “all-female band”, they are a “good hard rock band”, full stop. If anything they are a living proof (like Angela Gossow, Alissa White-Gluz and Masha Arkhipova, to name a few) that high quality heavy metal performers can be male or female, and that this thing of ours is not, nor should it be, a boys’ club. The fact that in 2014 I still need to go out of my way to make all of these remarks, as if I was saying something unheard of, is fucking pathetic, and yet if you visit any video in which a female metal performer is being interviewed a big chunk of what you’ll find are just different ways in which some creepy mouthbreathing asshole wants to fuck them. As long as this continues to be the norm, you bet this kind of shit continues to be necessary.

In the Red is a very straightforward record, aiming at getting your heart going and your fists pumping, and succeeding at both. From the opening riff of “I’d Sell my Kids for Rock N’ Roll”, to the last notes of the closing track, “Follow the Stream”, this is an album that is made for headbanging.

Crucified Barbara seem to be determined to defy the genre conventions, occasionally straying from hard rock and moving into a more traditional heavy metal sound, paying tribute to the likes of Motörhead and Judas Priest. If the lines between hard rock and heavy metal are already quite blurry, these girls were determined to just ignore those classifications altogether and use whatever sound they thought would be better at conveying their raw power.

Lyrically the album does not limit itself to touch upon “traditional” hard rock topics of parties and relationships, occasionally straying into the realm of gender issues, particularly in “I’d Sell My Kids for Rock and Roll” and, of course, the dark “To Kill a Man”. While the former deals, in a perhaps tongue-in-cheek manner, with being a “musician-while-female”, starting with the accusation of “You say I’m good for being a girl”, the latter deals with much more grim matter of abuse of women. With a powerful video to go with it, the band delves into the revenge fantasies of the countless women who are victimized routinely by men. In a society where we accept some mistreatment of women as “business as usual”, from their objectification to the victim-blaming of sexual abuse victims (“she was asking for it”, “she shouldn’t have been drinking”, “why would she dress like that if she didn’t want to”) it is nice to see that the band took the opportunity to raise their voices on this issue.

Although I really enjoyed the album (I can’t recommend “Electric Sky” enough) the production could have been better. At times the music sounded like it was encoded poorly (it had the sort of metallic echo you get on a 96kbps MP3) and it really took away from the experience. Even though this might have been a problem with my individual copy (I obtained an alternative batch of files and this seemed to be less of a problem, although it was still present) I think this wouldn’t have happened had a higher level of care been employed in the production.

In the Red is a damn good album, and I really think you should give it a shot. Although fans of hard rock acts like Airbourne will be headbanging the shit out of this one, metal fans should also pay close attention. There’s a little bit for everyone here.

Powerful music that is made to break the necks of headbangers everywhere.
Balls to the wall rock and roll
The production seems to have had some problems
4.5