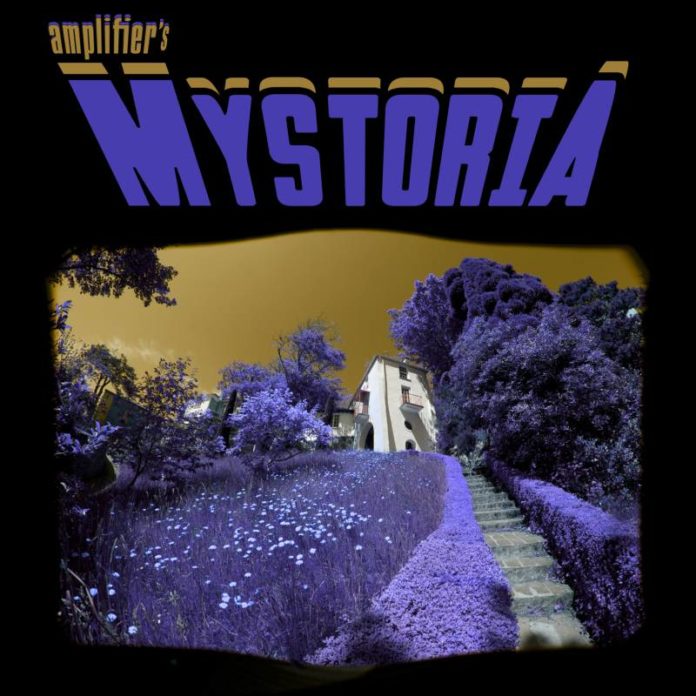 Back when I saw Amplifier for the first time, it was at the opening year of math-rock/post-rock/experimental/whatever festival Arctangent. In a festival made for spry young kids headbanging in 7/4 to noodly guitars, Amplifier were a strange band to see on the bill, especially after releasing the subdued Echo Street LP. The promise of the proggy space rockers’ performance was, however, enough to draw a sizeable portion of the older crowd to the festival and, despite some exhausting technical difficulties, Amplifier’s set was one of the most spirited and memorable performances of the whole event. For a band which had such a counteractive relationship with a major label, seeing Amplifier perform with so much heart, after being released from the clutches of Sony BMG, was a joyous sight to behold. Now that same energy shines through on their latest full-length, Mystoria.

Straight out of the gates, Amplifier make their statement about their latest musical evolution in opener ‘Magic Carpet’. Delicate and precise math rocky scales draw us in before splitting our heads open with foreboding, reverb-heavy tritones. It’s only the first track and it captures the album in its essence: contemporary progressive music moored in the familiarity and nostalgia of traditional metal. It’s only a minute or so in, and it’s already one of the bluntest, most high-energy introductions in prog since “Haaaaave you seen the liviiiing?!”.

A far cry from the cruising riffs of their spectacular debut more than a decade ago, 2010’s psychedelic The Octopus or the far more tentative Echo Street, Mystoria gets its kicks from playing into the more beloved tropes of rock n’ roll. As frontman Sel Balamir states, its purpose is ‘energy and feeling good‘, shedding all the pretentious baggage that comes with progressive rock; they shamelessly channel decades of beloved rock tropes throughout the album, citing the influence of quintessential rock bands such as Van Halen, AC/DC, and Soundgarden. Even the aptly-titled ‘Named After Rocky’ brings back those head-pounding arena rock vibes, and with more cheesily-awesome riffs than you can shake a Big Muff at.

With callbacks to tradition and ‘back to basics rock’ being more popular than they’ve ever been, Mystoria could have easily been a deliberately cheap and lazy album, made to cash into the passé retro crowd that remembers ‘real music!; and yet, despite tapping into some unnecessarily ‘throwback’-sounding production, the record never feels forced or like a cliché. All the songs feel authentic and inspired, not surprising for an album that dips so unabashedly into rock convention; the record feels like a fresh and bold return to form after their last record, picking up where The Octopus left off, and blowing it wide open.

In a genre infamous for elitism, pretentiousness, seniority and taking itself too seriously, it’s almost purifying to see a band so respected in European prog to subvert everything that’s expected of them. Mystoria boasts a boisterous brand of condensed and tight rock n’ roll, with skilled progressive technicality and a youthful, optimistic glimmer. While it’s unfortunate that Mystoria just missed out on a hugely fitting summer release, there’s more than enough longevity to last to next June.

Huge amounts of energy, positivity and entertainment.
Music that makes you go 'fuck yeah!'
Very much not the ideal starting place for new listeners.
4