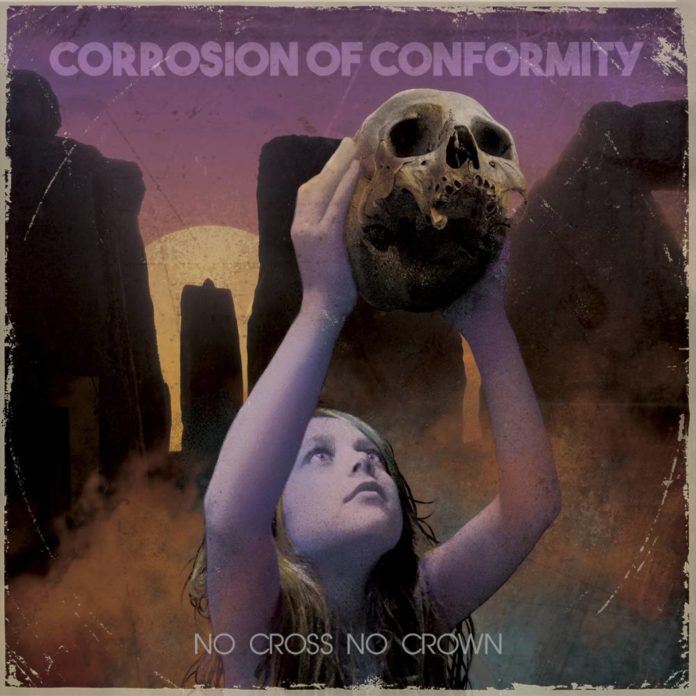 While being recognized as a pioneer in a genre of music is no small feat, Corrosion of Conformity have managed to deserve this distinction twice in their three-decade (and counting) career. Their early releases had a raw, hardcore punk feel, which quickly morphed into a speedy, crossover thrash sound amidst lineup changes. Many fans and critics considered the first two full-length releases and eps by CoC to be an important sonic bridge between punk rock and heavy metal. By the time the band got around to writing and releasing their commercial breakthrough, Blind, the sound had taken a pretty dramatic shift into more straight-forward, blues-tinged heavy metal. With slower riffs and clean vocals (mixed with a distinctly southern vibe), Corrosion of Conformity now sounded like an unholy alliance between The Allman Brothers and Black Sabbath, a sound that saw the band rub elbows with the likes of Crowbar and Eyehategod. Despite further lineup changes, the band released some critically-acclaimed records, and gained legions of fans.

After a brief hiatus, a reunion of the Animosity lineup that resulted in a new self-titled album in 2012, long-time rhythm guitarist/lead vocalist Pepper Keenan has returned to the fold, and Corrosion of Conformity unleash their latest offering, No Cross No Crown. It seems a little cliché to say that Keenan and company picked up right where they left off on 2005’s In The Arms of God (the last recording to feature Keenan in the lineup), but it’s an applicable statement in this case. Southern-fried tracks like “Wolf Named Crow” and “Forgive Me” are peppered (pun intended) with Keenan’s trademark drawl and bluesy riffs. “Nothing Left to Say” is a moody, slower piece that showcases the band’s soulful side, while still having a sludgy, Black Sabbath-worthy riff that will have you throwing up the horns.

Throughout the course of No Cross No Crown, you’re treated to little instrumental interludes, such as “Sacred Isolation” and “No Cross,” which help segue into a change of mood and pace between the full-blown tracks. These interludes provide an extra layer of atmosphere to the album, and manage to create a pretty nice flow. The production is top-notch, with a pretty clean tone that allows you to hear all the nuances of each instrument without coming across as sterile. That being said, the vocals COULD use a little bit of a volume boost on occasion, with the track “A Quest to Believe (A Call to the Void)” being a notable example. The song is epic, and my pick for the best track on the album, but the guitars are turned up so loud in the mix, the vocals almost feel like an afterthought. “Son and Daughter” is another track with a mighty riff that overtakes every other aspect of the song, and again, the vocals almost don’t even matter (despite the fact that Pepper Keenan’s voice is as strong as ever on this release). Overall, though, the album is pretty solid, and will certainly be a welcome addition to any long-time fan’s collection.

Corrosion of Conformity have put out a great collection of records over the years, and No Cross No Crown continues that tradition with some heavy new tunes that will get any heavy metal fans’ blood pumping. While they aren’t exactly reinventing the wheel here, there are still enough hooks and grooves in their sludgy approach to metal that you’ll definitely have this album on repeat for a while. Pick up a copy of No Cross No Crown, and blast it at full volume!

Corrosion of Conformity - No Cross No Crown
Excellent new record, marking the return of lead vocalist Pepper Keenan.
Reader Rating0 Votes
Heavy, yet catchy riffs
Pepper's voice is as strong as ever
Great album flow, with interludes that add some extra atmosphere
Not much has really changed in the formula
Occasionally, the guitar volume overtakes the vocals
4.6