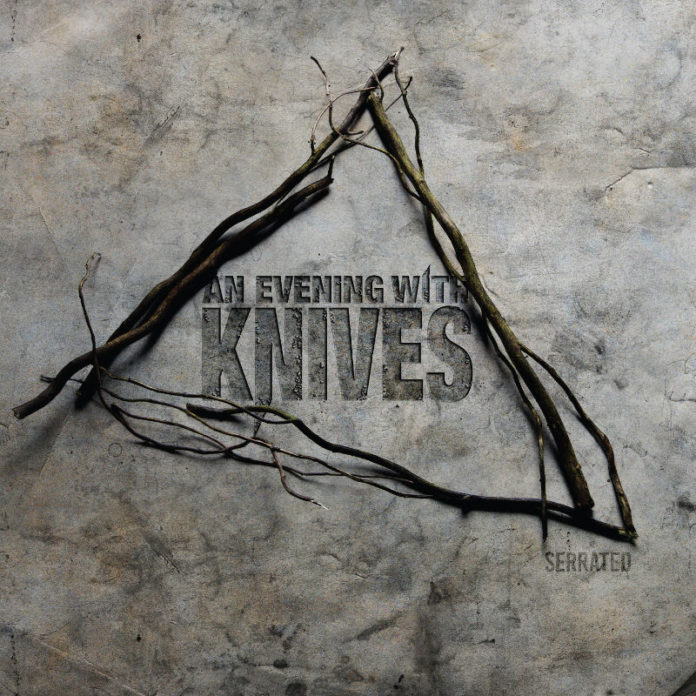 Straight out of the Netherlands comes An Evening With Knives (AEWK), with this, their debut album. The Dutch trio, signed to Argonauta Records (with Lighttown Fidelity handling the vinyl release), sing in English while jamming out some heavy hard rock in the usual three-piece rock configuration of bass/drums/guitar. Some electronic touch-ups here and there add some extra life but, generally, if you’ve heard at least five heavy rock albums in the past decade, you could average them out to approximate what you’d hear on Serrated.

It’s not that the band is lacking for riffs, as they pull off several which go above ‘decent’ and into fairly groovy slides. Likewise, the dynamic between the musicians is pretty strong and well-balanced, and the change-ups in song direction bring an essential vitality to them, instead of feeling like lifeless rehashings of the usual heavy rock staples. The quick guitar noodling in “Restless”, for example, bursts up out of the slower grind the rest of the song packs in a way that gives it great impact and contrast.

My objection to it, and really the only thing standing in the way of my enjoyment, is that the band seems too fond of heavy rock as it is. To be sure, there are some genres where you don’t want your first album to rock the boat too much, or you’ll likely end up vanishing a few years after, with the few fans who latched on wondering where you went. But with heavy rock, I’d argue that reinvention (to some degree) is a necessity for bands who want to play that style without sinking themselves into forgettability. It is, after all, a sub-genre where you can pull out records from nearly half a century ago, do little more than pitch them down an octave or so, and have something near-identical to modern output in the field.

AEWK do throw in those previously-mentioned electronics touches, which help alleviate the repetition factor slightly with their extra texturing. Thing is, they never feel like anything more than ornamentation; they’re not an essential part of the song, they don’t alter the playing around them to any noticeable degree, and it’s even difficult to imagine them being cued in during a live performance. But they are a step towards something broader in scope, and I hope AEWK follow that to something more than what they’ve put together with this album. Something more like the instrumental stretches of the album’s monster track, “Fade Out”, which let the melody inflate to a grander scale and place emphasis on bad-ass rocking over providing something suitable for steady vocal rhythms, or the near-sludgy dips of the sadly short closer, “Drowning in Daybreak”.

If I’ve given the impression of being down on the band, that’s not the case. It’s a solid album, and the tightness of the group in playing together, particularly on their debut LP, is impressive. But in listening to the music, I just kept wishing they could have found a keyboardist who’d integrate well into their arrangements, simply to inject some more complexity and expand the possibilities for what they play. In their current form, AEWK have style and a firm grasp on what works in heavy rock. And while I’m sure there are people who will fully dig what this incarnation of the band has to offer, I can’t help but hope, for the long-time creative health of the group, that they’ll find new territory to explore with their next release.