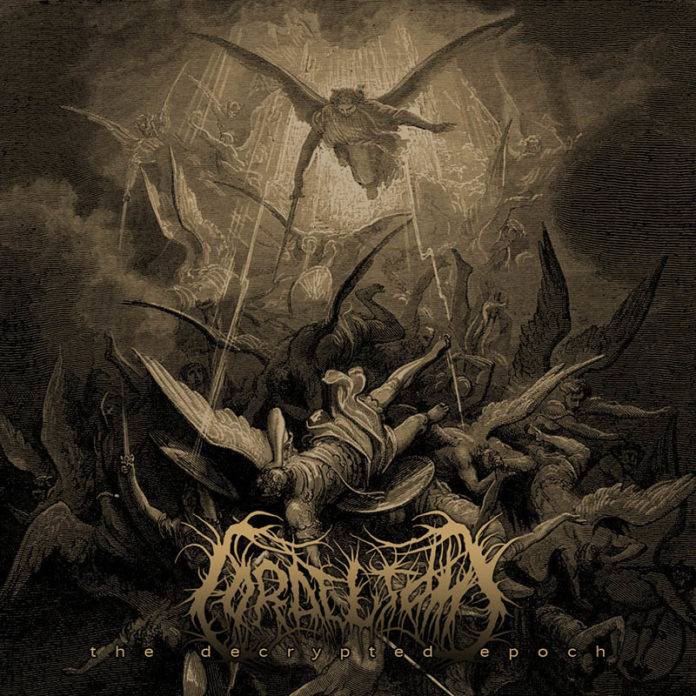 In the recent interview I did with Mike O’Hara, he explained to me that the first instrument he learned was to play the drums, and while Splattered Entrails uses a drum machine, he decided to use his drumming chops in one of his more recent projects, Cordectomy.  While we still get music that is very much brutal death metal on “The Decrypted Epoch,” the tempo has been turned down to a mid-paced bulldozing sound that still likes to crush everything in his path, as it is a purely barebones project; guitar, drums, and his voice box.  It is definitely an interesting project to hear him due, especially if you’re used to his usual style of relentless and fast-paced brutal death metal.

All of the tracks fit very well together on “The Decrypted Epoch,” as each one have all the same elements, but are used in different manners.  Tracks such as “The Dissolution,” “The Infinite Spiral,” and “The Vestication” show that his groovy style and thunderous growls compliment the slower sound very well and making sure that his drumming is tight and on-point to boot, while tracks like “The Paradox,” “The Great Misfortune,” “The Despondency Of Misery,” and “The Procreated Infection” show off his faster-yet-chugging style.  I think it lends Cordectomy a great deal to not go full balls to the wall on the faster portions, or else we may wonder why these aren’t just Splattered Entrails tracks, so it definitely gives “The Decrypted Epoch” a very good identity of its own.  I very much look forward to hearing more Cordectomy tracks in the near future.