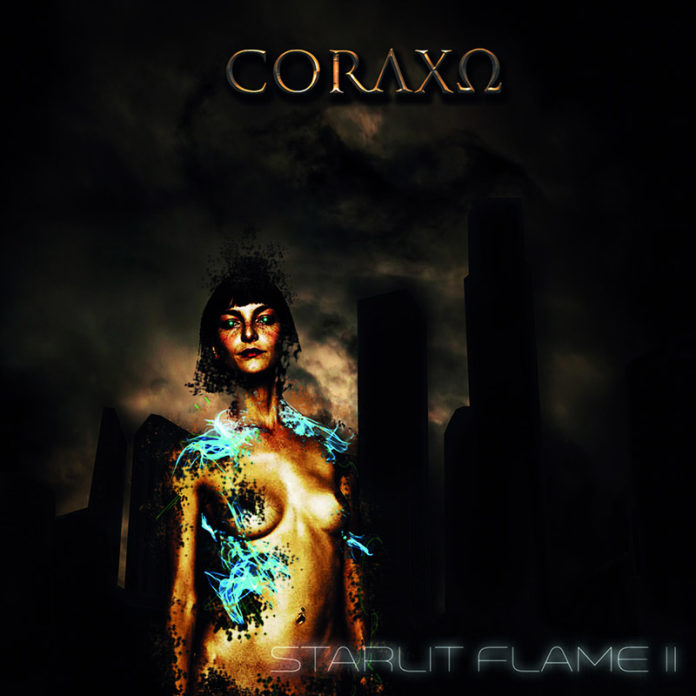 If I try to describe an album by a band that mixes death metal with electronic music, most likely your first conclusion would be industrial metal, probably something along the lines of Nailbomb or Fear Factory. In the case of Finland’s Coraxo, however, industrial isn’t an entirely accurate descriptor; with industrial music, the electronic element is meant to add a layer of “filth” to the sound, and make the music more abrasive. On Starlit Flame II, Coraxo’s second EP, the electronics are a bit more melodic, having more to do with synthesizers than with machine sounds. Think of the synthesizers you hear on the first Terminator soundtrack, and you have a pretty good idea of what to expect.

Initially, the synthesizers and aggressive death metal make for an odd listening experience, since you could almost separate the synthesizers from the rest of the music and make two different albums entirely. Melodically, the two sounds blend pretty well, once you get past the shock of it, particularly on the final track “Ghosts.” The electronics push the music into a more 80’s feel, while the heavy side of things are pretty modern sounding, along the lines of the Gothenburg death metal scene, though much more mid-paced. “Tangier” is an example of how odd the two styles sound together; about a minute into the song the synths shift into a Tangerine Dream-esque tone, mixed with the heavy crunch of guitars, and the high-pitched growls of the vocalist. Pretty odd sounding, but it certainly creates an impression, which I’m sure is the purpose in such an unorthodox approach to song-structure.

The production leaves a little to be desired, since the electronic bits seem to overpower the rest of the band in the mix. The riffs are good and crunchy, you can hear the vocals pretty well, but it all sounds like it’s underwater, buried under the synthesizers. Still, I have to give Coraxo credit for taking death metal in an interesting new direction, and with a little tweaking on the song-structure, and tightening the screws a bit on the production,I could see them paving the way for an entirely new sound.