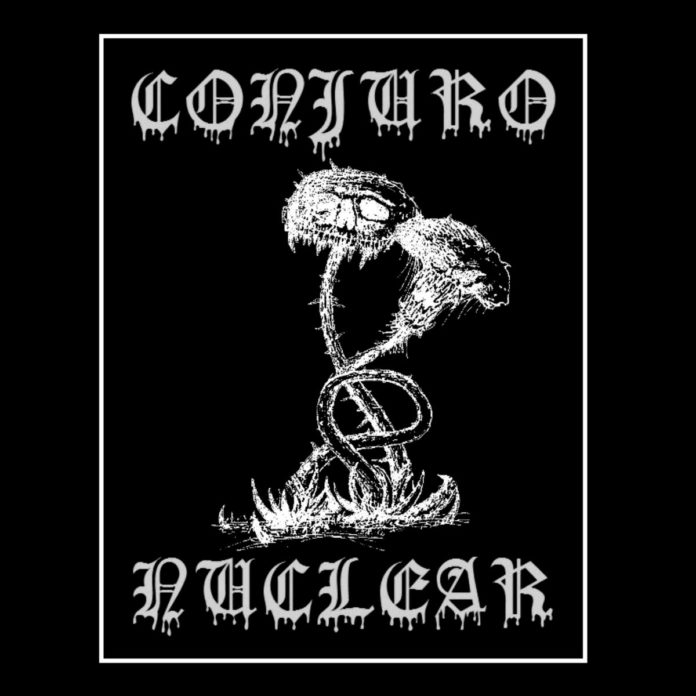 Sometimes we really shouldn’t judge a book (or a record) by its cover. If I was to go by their cover, from the MSPaint-esque quality of the colors to the Goth-ish bloody font (in electric green, for some reason) I would say that this is pure shit. Although the promo described Conjuro Nuclear as “Psychedelic black metal”, my experience with PR companies is that they’ll do anything to hype a band, even if it means just making shit up as they go; as a result, I thought that Conjuro Nuclear were just going to be a run-of-the-mill indie black metal band. I was wrong.

While I’m usually reluctant to give credit to sub-genres of sub-genres, the truth is that “psychedelic black metal” is just… appropriate. With a sound that is at times reminiscent of the keyboard-infused blackness of Burzum, the thrashier black metal of Darkthrone, mixed with some 80’s goth and stoner vibes, Conjuro Nuclear are a band that simply defies definition by conventional standards. Their music is something that you simply need to listen to really grasp.

Although not aiming at being considered an “atmospheric” album (like Burzum‘s Sôl austan, Mâni vestan, for example) here Conjuro Nuclear succeed at creating a sense of unease throughout, keeping you on your toes the whole time. If nothing else, this is an album that was made to be the soundtrack to a cocaine-infused highway pursuit that will end up in chaos and death.

While the album is, without a doubt, a magnificent product, it would have packed a much greater punch with a more polished production. True, the cacophony would perhaps be lost in a cleaner mix, and the threat level might take a hit, but a mix where the levels are managed in a more competent way, and in which the growls and the music are given an adequate time to shine, is just a must for music of this quality. Still, don’t let this deter you from checking these guys out; as a friend said, what they lack in production they make up for in atmosphere… and what an atmosphere!