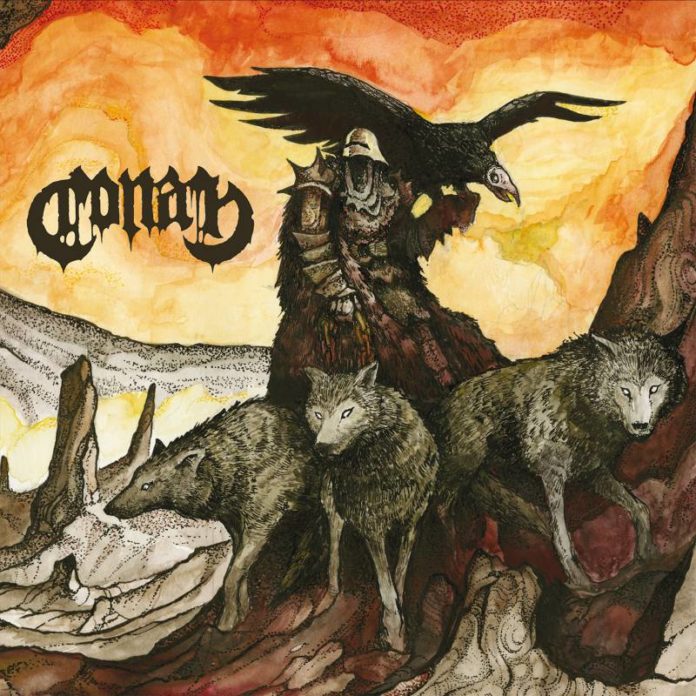 As Conan have been proving since 2006, not everything from Liverpool is about gorgeous football (Liverpool FC) or the “Mersey Beat” (which gave the world The Beatles). Initially formed as a two-piece which released Battle In The Swamp, Conan eventually became a power-trio with their much acclaimed 2nd EP, Horseback Battle Hammer. Two full-lengths, a pair of splits, and a live recording of the band’s set at the esteemed Roadburn Festival later, Conan are set to unleash a new assault on the senses in the form of Revengeance.

Despite featuring a different lineup, Conan still manage to deliver the goods, thanks in no small part to guitarist/vocalist Jon Davis’ leadership. As the sole founding member, Jon IS essentially Conan, and his growth as a musician is immediately apparent on “Throne Of Fire.” The opening riff sets the pace at a slightly faster tempo than long-time listeners might expect from these peddlers of “Caveman Battle Doom.” The vocals take on a hardcore punk edge, similar to those of Keith Morris (vocalist of Off!, Circle Jerks, and Black Flag), though there are some deeper yells that get thrown in as well. Another example of this new approach is on the title-track, “Reveangance,” which features a much faster speed than what Conan are known for, though they lose none of their intensity. For those looking for the droning, Electric Wizard-like riffs of the band’s earlier releases, fear not, “Wrath Gauntlet” and the sprawling “Earthenguard” will satisfy your craving.

While Conan have never exactly played the most technical music (that’s kind of the point in this genre), it’s still a pleasant surprise to hear a few time-changes and speedier sections. The changes made to Conan’s core sound feel like a natural progression rather than a bid for experimentation. Everything I love about the band’s old sound is still there, with a few new tricks. The other noticeable change on this album is the smoother production; the crackling, overdriven guitars are still there, but they no longer muddy up the rest of the sound. While it can still be considered amplifier worship, this time the drums and vocals play a bigger part in the recording. This can be chalked up to experience, and shows a positive trend in the band’s maturity. I must admit, though, that the duel vocals took a little getting used to, which can obviously be traced back to the personnel changes.

Although the differences in Revengeance can be a bit jarring at first, they don’t detract from the musical performance, which is pretty excellent. Longtime fans will probably feel the same, but after a track or two I’m sure they’ll be on board. It’s great seeing a band who can still put out a solid record, despite such significant line-up changes, and even manage to take the sound smoothly into new territories. Fans of the stoner doom/sludge genres should pick up a copy of this, especially if you’re into bands like Bongripper, Slomatics, and Cough.

IN A NUTSHELL
With an ever-so-slight change in direction, Conan continues to mature as a musical entity, and gives a solid performance here.
POSITIVES
Excellent production
Changes of pace in the songs keep things interesting
The riffs are as massive as anything Conan has written so far
NEGATIVES
The newer additions to the sound take a little getting used to
Longtime fans might yearn for more of the droney early sound
4