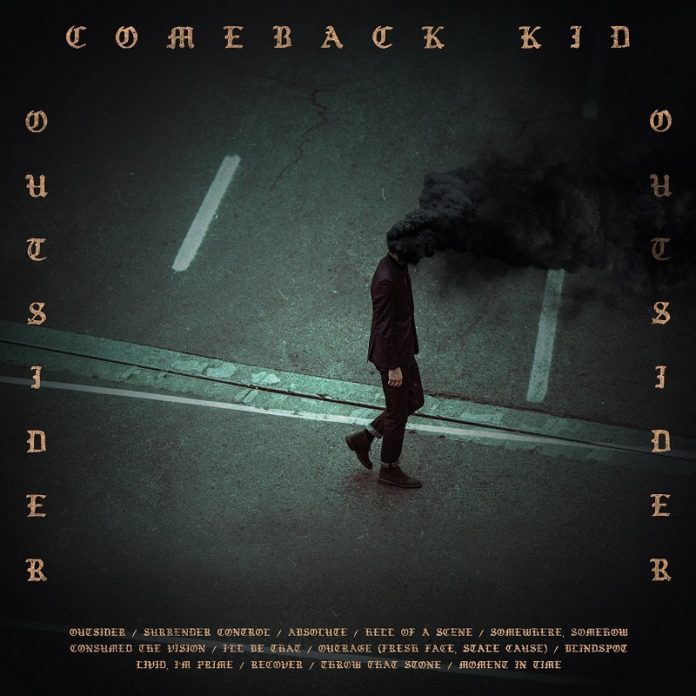 With Outsider, Comeback Kid‘s seventh album (and their first on New Damage Records), the long-running Canadian punk group spills out thirteen tracks of serviceable but not especially inspired material. Although the drumming hits hard, the yells are loud, and the guitar-work is gnashy, there’s little sense of actual urgency or anger throughout the record. It feels too polished and too comfortable with the formulas, and as a result, the music comes off as more of a perfunctory retread, with a few limp reaches for style expansion, than as something born from real emotional investment.

Touches like sweetly-harmonized multi-vocal choruses further suggest that the band is more concerned with marketability than with expressing genuine anger, which makes the adherence to punk stylings feel more cosmetic. And as it goes on and on, feeling like a slog despite being just over half an hour total, the sound of a band too set in its ways to let any raw vitality survive the studio process persistently seeps out across it all. It’s more disappointing than that usually is, because the band has audible talent smothered under the production (though the drums generally escape the worst of it), and as they show in tracks like “Absolute” (with Devin Townsend guesting), their riff chops can bring some real heat. But those exceptional times are in the minority, as most of the melodies and guitar riffs just end up too generic to be committed to memory, even if you’re actively trying to remember them.

Punk gets a lot of flak (and has for decades) about the original anarchic, fuck-it-all, burn-the-state spirit of its birth (setting aside how much of that perception was shaped by the fashion-sellers) being long dead. Albums like this help give that perspective extra credibility, while also suggesting that pop punk has fully infected any further attempts to keep the original style limping along.

THE BOTTOM LINE
A great example of an album which follows the letter of its chosen musical style, rather than the spirit
Reader Rating0 Votes
POSITIVES
Good drum-work and instrumental interplay
NEGATIVES
Most of the music just feels tired and uninspired
3

Burn the Army – The Tide to Sink the Summit