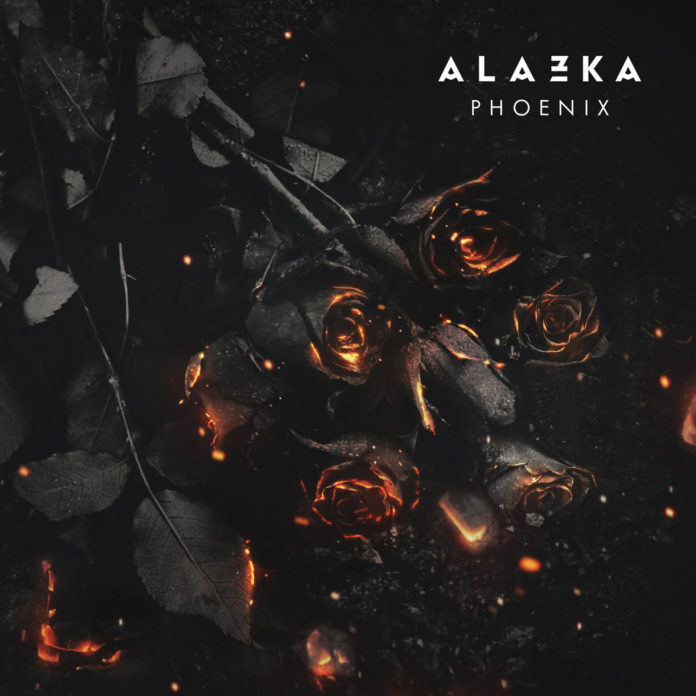 With their first full album, Alazka (formerly Burning Down Alaska) take aim at fusing metalcore and melodeath, mostly managing to succeed in that endeavor. Bouts of light emoting and warbling guitar trade places with slamming riffs and bolts of yelling with regularity, and the sheen of smooth production brings the two sides together with little roughness to be heard.

The biggest troubles lie in the mixing, which throws the volume levels of the vocals high above the rest of the instruments, nearly drowning out the guitar at times. Beyond that, most of the songwriting sounds recycled from earlier bands in the same style, even discounting the lyrics. Worse than that, it also sounds as though Alazka end up having to recycle their own material within the album, and by the time they hit the halfway point of Phoenix, it feels like they’ve pretty much exhausted their bag of tricks. The repetition, which would have been tolerable in EP dosage, becomes almost unbearable at the forty minutes and change that is packed within this LP. That being said, they do drop a fitting finish with final track “Fading Flame”, so it comes off as more of a padding issue than a lack of direction.

While there’s not a lot to fault on the technical side of the music, there’s just so little life to it, even in their loudest screams, that the songs feel almost robotic in their execution. The instrumental interplay brings some neat trade-offs and pick-ups to bear, and the guitarist does get some fun licks in occasionally, so while the band might have some interesting material in their future, for now it feels like they still have their training wheels on. Once they pop those off to begin experimenting with less rigidity and imitation, I don’t doubt they’ll be capable of turning out something of value; the question is whether they’ll reach that point before falling apart.

THE BOTTOM LINE
Feels like the result of a band jumping into the studio to get an album out before they'd written nearly enough material, and I'd be surprised if this ended up doing them more good than harm in public perception
Reader Rating0 Votes
POSITIVES
Smooth handling of the jumps between melodic and hard
Some nice tonality in the soft measures
NEGATIVES
Hardly anything fresh brought to the music by the band
3