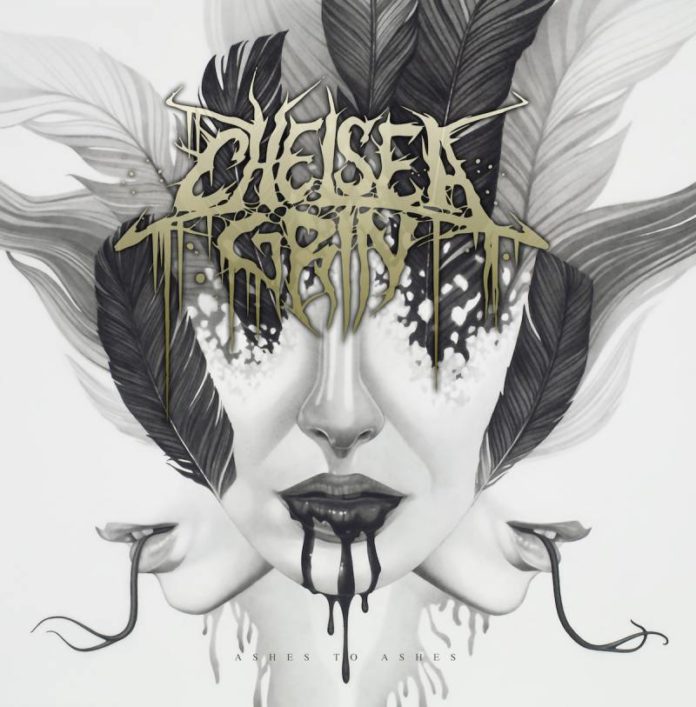 Chelsea Grin are a band that have never been shy about being labeled deathcore; in fact they embrace the label, and self-identify themselves as a deathcore band. Being so open about this categorization is a bit of a double-edged sword; on the one hand, Chelsea Grin have shed any doubt as to what they sound like, and will be embraced by fans of the genre. However, they have earned a lot of scoffs from the rest of the metal community, and have often been dismissed as “Warped Tour death metal.”

Ashes To Ashes sees Chelsea Grin covering a lot of the same groundwork they laid down on their previous efforts, though there are a few new elements added to the mix. Vocalist Phil Bozeman employs his high-pitched shrieks right off the bat, but there is a wider range of vocal styles present on Ashes To Ashes than you typically get on a Chelsea Grin record. There are just as many deep death growl style vocals, and some mid-ranged hardcore yells, and on the song “Waste Away” there are even some clean vocals. The feel on this album isn’t too far of a departure from your standard 00’s metalcore, a la The Devil Wears Prada or Parkway Drive, and like in the former, there’s even some programming and keyboards. There are also a lot of djent-like moments, such as the cleverly titled songs “Ashes” and “…To Ashes,” which are brief instrumental tracks that showcase some impressive shredding and melody that quickly move into a syncopated mathy rhythm that djent fans will really enjoy.

Sadly, Chelsea Grin haven’t gotten away from their old habit of two or three breakdowns per song; I find this a troublesome and frustrating aspect of the band. Why do you need three guitarists if most of the music is going to be open-chord chugga-chugga fests? It’s a bit lazy for just one guitarist to do it, irritating for a second guitarist to join in, and absolutely absurd to have a third guitarist participate. There are occasional flurries of melody layered in over the low-end, but they’re lower in the mix and are treated more as ornamental pieces. There are a lot of movements in the music, but it’s a tad too formulaic. Adding to the frustration is the fact that there are some great melodic moments in the songs, but that feel a lot like filler just segueing between breakdowns. Take “Nightmares”, for example; the song builds up into a creepy vibe with a great melancholic intro, with layered vocals and keys, but then quickly devolves into another djenty chug-fest. In general, the songs seem to blend together; although sometimes it’s intentional, like in the instrumental tracks I mentioned, it’s mostly because, truthfully, the songs just all sound way too similar to each other. While breakdowns might sound good in a live setting, recordings aren’t the best platform to convey that energy. Mosh-pit anthems are kind of pointless if you’re listening to them in your bedroom, unless, of course, you want to practice your windmills in front of the mirror.

Production is handled by Diego Farias, who previously worked with such bands as Animals As Leaders, Volumes, and Stray From The Path. Diego does an excellent job with layering different guitar bits, vocals, and keyboard arrangements. The drums come through really clear, which is exactly what the music calls for, as it’s extremely percussive in nature. The keys and melodic guitar parts take on an almost symphonic metal feel, which I found thoroughly enjoyable. The production is really the saving grace of Ashes To Ashes, and I believe that in anyone else’s hands the music would have come off a bit too schizophrenic and directionless.

Overall, Chelsea Grin aren’t really going to change anyone’s opinion about their music with this latest offering. The detractors are going to roll their eyes and say “I told you so,” and the fans are going to absolutely love the new album. Ashes To Ashes isbusiness as usual, but the kind of business that has worked for them so far. While the melodies are excellent and the vocals are done very well, I just wish there was a bit more variety.