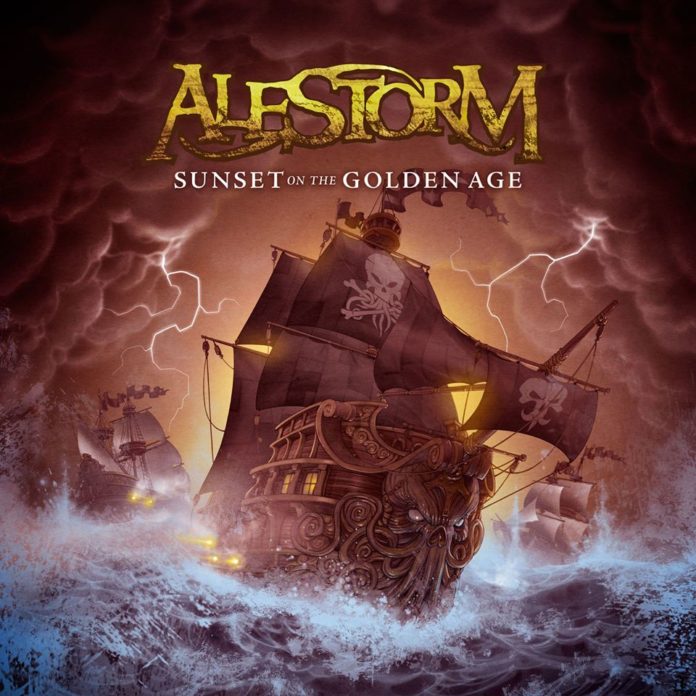 Everybody has a gimmick. Manowar have their homoerotic “true metal” thing; Arch Enemy their “I’m 15 and just bought my first Che Guevara t-shirt “ anarchic theme; Behemoth their “have you seen Nergal’s abs, also Satan” videos; and As I Lay Dying their “I love Jesus and having my wife killed” motif.

Alestorm are no exception. Originally aimed at being a power metal band, they quickly realized that their pirate-and-alcohol themed songs were fairly popular, and rapidly embraced the “pirate metal” label that had been reserved to Running Wild for years. Starting with their 2008 release Captain Morgan’s Revenge, all the way down to 2011’s Back Through Time, Alestorm have carved themselves a nice little niche in the metal community, even if mostly populated by teenagers who just graduated from wearing Slipknot t-shirts.

As someone who has enjoyed some of Alestorm’s material, I know that they themselves don’t seem to have very high expectations of their music. They know, or at least they should, that there is a limit to what you can do before you start jumping the shark and just regurgitating the same crap over and over. Hell, when dismissing their critics in their song “Scrapping the Barrel” in 2011’s Back Through Time, they even seem to concede that they’re destined to kick a dead horse:

You may think you’ve heard all this music before
That “Running Wild” did it back in 84
But times are a changin’ and we don’t give a damn
So if you don’t like it, go start your own band
Many have told us that we can’t go on
That one day we’ll run out of lyrics for songs
But when the time comes to write album four
We’ll scrape out the barrel once more

Sunset on the Golden Age, Alestorm’s newest release seems to be, just as they prophesized, the result of vigorously scraping the bottom of the barrel. Running a little bit under 50 minutes, this is an album that does not seem to represent any kind of evolution, change, or improvement from any of the things we had already seen from this band. Being a band that knowingly and willingly locked themselves in a corner, Alestorm find themselves unable to do anything that goes outside of their already repetitive sound; it’s not that I want them to do something completely new and different (we’re never going to get a progressive tune out of these guys, and that’s OK) but rather that I want to see them be interesting. You see, what Alestorm did at the beginning was fun not because of their musical prowess (I doubt they themselves think that they’re particularly good musicians) but rather because of the novelty of it all; the problem is that just as with anything else, there is a point where the novelty wears off (if you don’t believe me, ask yourself when was the last time you were shocked by someone wearing corpse paint).

This is an album that is packed with repetitive music that represents no change or improvement from any of their previous works, and that actually seems offensively stupid when you pay attention to it. It’s not that I was expecting the lyrics to sound like something out of John Milton, but there are just so many ways you can tell people that you love to drink without sounding not so much like a party animal, but like someone who craves attention, has a fucked up liver, and needs some sort of counseling. Of course, since Alestorm’s core fanbase seems to be made up of kids who just learned how to wipe their own asses, I’m sure they’ll still manage to feel “metal as fuck”.

Although in the past Alestorm had covered some pirate-themed songs, like “Wolves of the Sea” and “You are a Pirate”, I guess that this time around there weren’t that many buccaneer-related songs to choose from. Instead, and just demonstrating that they’re rapidly descending into the realm of cerebral hypoxia, they chose to cover Taio Cruz’s song “Hangover”. You see, Alestorm like to drink. I know, they’re very secretive, with all their pictures featuring rum and their songs about drinking, so they really decided to be open about it by covering this terrible song, replacing the horribly auto-tuned lyrics of Cruz with Chris Bowles’ sandpapered singing, with some added keyboards and drums for good measure. Congratulations.

While in Back Through Time Alestorm tried a couple of thrash-infused riffs, Sunset on the Golden Age sees them actually go full thrash on one song. “Wooden Leg” is, by far, one of the worst songs I’ve heard this year; it’s repetitive, cacophonic and criminally stupid.To be fair, Chris Bowles’ voice does seem to work well on a thrash setting, even if the song is utter shit.

For a band that is destined to be the go-to music for kids drinking beer at a parking lot, Alestorm seem to be doing well. They are exploiting that niche to its full potential, including video game references (the intro to “1741” is just a Nintendo-esque MIDI), “raaaaandom!!!111” lyrics (ninja skills are mentioned in “Wooden Leg”) and repetitive music. As a person with little to no faith in my brethren, I’m sure that this new release will be warmly received by many.

Then again, so will the Ebola virus.

Agreed. Time to walk the plank….