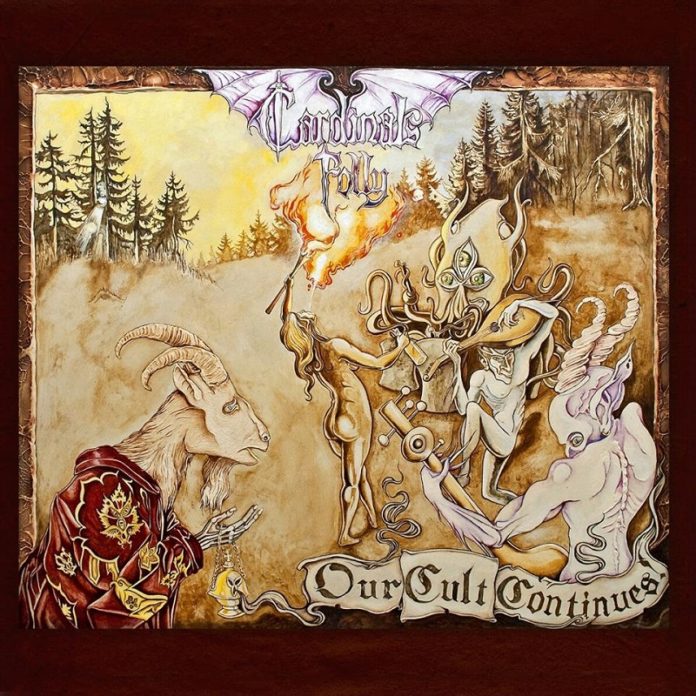 While dozens of crazes have faded in and out of the metal community in the past decade, the holy trinity of stoner, black and doom have been the genres of choice for fashionable, PBR-sipping trend-hoppers for the longest time. Indeed, for every Om, Krallice or Thou there are a million copyists, half-heartedly riding the bandwagon until it catches fire and bolts over a cliff. However, since reincarnating out of the ashes of The Coven in 2007, Finnish doom maestros Cardinals Folly scoff at these trends, bearing a resentment for stagnation and idleness within metal. With their sophomore LP Our Cult Continues!, the band refines their sound into a heady fusion of stoner, doom and progressive metal with a more avant-garde lean than their previous records, moulding into a transgressive beast of a record that would make for Shub-Niggurath’s album of the year. Probably.

Usually when a band dismisses current trends in their genre for the purpose of standing out from their contemporaries, they’re often all bark and no bite when it comes to sounding different. Cardinals Folly, however, are an exception. They believe that metal should not be a one trick pony, and have the extreme, progressive attitudes that brought it success back in its glory days; for once, this is a band that actually lives up to their claims. While Cardinals‘ songwriting is rooted firmly within the soil of Sabbath, Candlemass and Lucifer’s Friend, the fruit it bears is far more ripe, feeling distinctly modern and far more inspired than their contemporaries, with their muses feeling much more spread out beyond the spectrum of metal, taking cues from post-punk to traditional European folk.

While the group’s promising 2011 full-length Such Power Is Dangerous! brandished an intimidating 70 minutes worth of music, their sophomore record sees them trimming the fat, making for a more manageable hour-long romp of hellish stoner-doom antics. The songs are still five to ten-minute long stretches, but each one of them manages to contain its own rich progression between convention and experimentation. Even the harder, more straightforward headbanger tracks like ‘The Black Baroness’ have avant-garde twists to them that are even harder to categorise, constantly evolving and shifting into unexpected and fantastic forms like some twisted Eldritch horror. Vocalist Mikko Kääriäinen does a great job at conducting the ritualistic mass throughout the album,with his throaty, baritone bellows setting a perfectly sinister tone for the record, similar to the haunting sample of a sacrificial incantation which prefaces the album and establishes the record’s darker fascinations, inspired by Lovecraft, Chambers, and dark gothic medievalism.

Cardinals Folly stands above all the bands who live to romanticise the ‘golden age of metal’. The record perfectly encapsulates the heritage of European heavy metal, but with a strong goal to advance further, take risks and reap the rewards. Our Cult Continues! is a huge step towards evolution for traditional heavy metal revivalists, but still imbued with enough nostalgia to rake in new fans. Make no mistake, these guys are going to start turning heads very soon.