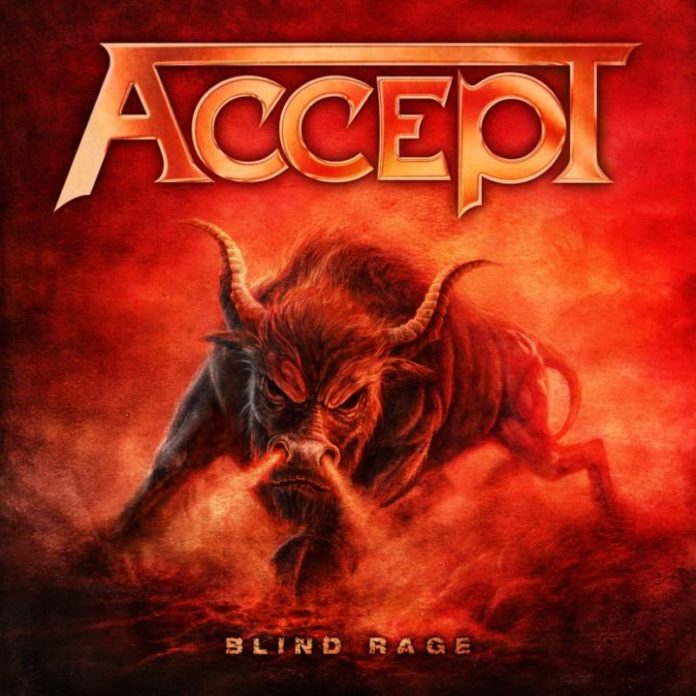 When Accept dropped the earth-shattering Blood of the Nations back in 2010, I knew that it would be hard for them to achieve the same lofty musical heights on subsequent offerings. Sure enough, 2012’s Stalingrad, while certainly a solid album with its own merits, couldn’t quite reach the bar set by its predecessor. Upon the announcement that the band was poised to release a third album with Mark Tornillo at the helm, I knew it would be good, but I wasn’t convinced it would live up to even it’s closest sibling. Thankfully, while Blind Rage still doesn’t quite equal the now classic Blood of the Nations, it is a more complex, varied, and fulfilling album than its already great predecessor.

One thing you’ll notice on first listen is how emotive and melancholic several of the new songs are. Tracks like “Wanna Be Free”and “From the Ashes We Rise” recall the most emotional moments from Balls to the Wall, which really showcases Mark‘s more melodic approach. He’s in top-form here using every part of his range and sounding, finally, completely comfortable within the band.

While those more sombre songs are great in their own right, it’s the more aggressive tracks that rule the roost. A few of these songs will, no doubt, go down as some of the all-time classic Accept songs. My personal favourite comes in the form of “Dark Side of My Heart”, which starts with a butt-shaking Russian Roulette style riff before entering in to a more subtle, sparse structure for the verse. Wolf Hoffmann‘s solo here rolls like a tank through the listener’s brain, achieving a great balance between showmanship and service to the song. Another highlight is “Bloodbath Mastermind”, a violent song with a great backing vocal that I’m sure will sound amazing being hollered from a thousand throats.

Performance-wise, Stefan Schwarzmann is all over this album, pounding on his kit like he’s trying to make the earth move. His timing is beyond reproach and his sense of rhythm seems to have shifted slightly from the last two albums, setting Blind Rage apart in a small but important way.

My only real gripe with the album is on the production end, and it’s only because they’ve chosen to work with Andy Sneap once again. Andy is a great producer who has been a big part of lots of great records from the last decade. Unfortunately, many of these albums sound eerily similar to one another. Don’t get me wrong, the mix is spotless and rich, but there’s nothing that makes it unique. Sonically, Blind Rage fills the exact same space that Stalingrad did.

Blind Rage sees Accept continuing their march toward righteous, well-earned domination of the metal world. You can tell that the boys really put their all in to this project, and it has certainly paid off. It may not be the best album that this configuration of the band has brought into the world, but it’s damn close. Blind Rage is essential listening and will certainly be on a lot of lists at the end of the year.