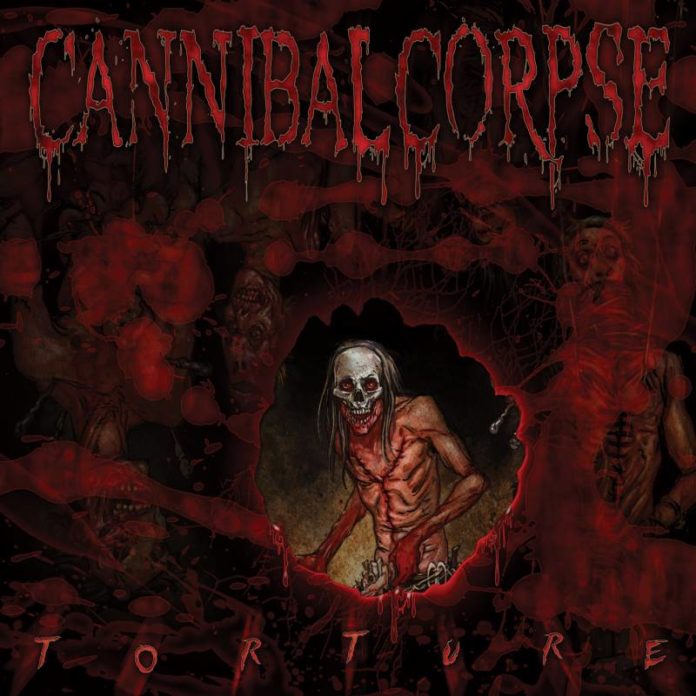 When knowledgeable people begin to talk about death metal, Cannibal Corpse are always one of the first bands to be spoken of.  Do you know why that is?  Because they are unequivocally one of the greatest bands in the world when it comes to death metal.  Having been at the game of disgusting and vomit-inducing carnage for 24 years, Cannibal Corpse has consistently been one of the premier acts in all of the music world, in both the studio and in a live setting.  Everybody reading this already knows the extensive history of the legendary Cannibal Corpse, so I am not even going to waste our time explaining it all.  But, what I will say is that after the 2009 release of “Evisceration Plague,” they are back with 12 new tracks of visceral death metal just simply titled “Torture.”  I love that album title so damn much for the exact same reason why I loved “Kill,” because there was no deception behind it.  You cannot get anymore truthful with an album title as either “Kill” or “Torture,” creativity be damned.  With two weeks from the world-wide release of “Torture,” I feel it is was my duty to dissect and digest the guts of this album many, many times, and now I will share my tale of gore-and-mutilation-laden pornographic adventures.

A little more than a month ago Cannibal Corpse were happy enough to release the tracks ‘Demented Aggression’ and ‘Scourge Of Iron’ to the masses as a tease for what was to come on “Torture.”  When I had originally heard ‘Demented Aggression,’ I immediately thought of the Cephalectomy track ‘Espousing The Lore Of Ancient Mythos,’ and while I’m positive it was just a coincidence, anything that can conjure a song from “Eclipsing The Dawn” is going to get my attention.  Plus, the second riff of ‘Demented Aggression’ is absolutely vicious, and with George “Tree Trunk Neck/Corpsegrinder” Fisher quickly belting his violent lyrics over it is the perfect combination for fans of their more recent work, such as “Kill.”

I quickly mentioned “Kill” above, and it will not be the last time I do so, because “Torture” feels like the little brother to it.  The reason I say this is that musically it feels very similar to that of “Kill.”  For instance, ‘Sarcophagic Frenzy’ seems like a direct descendent of ‘Five Nails Through The Neck’ at times, and ‘Encased In Concrete’ is the conjoined siamese twin to ‘Purification By Fire,’ which there is absolutely nothing wrong with that since those two tracks were among my favorites from “Kill.”  We are only four tracks into “Torture,” so this is going exceptionally well so far.  “Kill” isn’t the only album that Cannibal Corpse are trying to conjure on this album, but the guitar tone seems to be a mixture of “Gallery Of Suicide” and “Bloodthirst.”  It’s almost as if the band is trying to give you the best of the “Corpsegrinder”-era, and I am perfectly okay with that.

Even though there is a lot of great material that harkens back to some older albums, I don’t want to give the impression that Cannibal Corpse was incapable of creating new music when it came to “Torture.”  On the contrary; they do quite a bit of things that are specifically unique to them.  Sure, you have the frantic and visceral attack of tracks like ‘As Deep As The Knife Will Go,’ ‘Caged…Contorted,’ and ‘Crucifier Avenged,’ but there is a lot of excellent material that really made me fall in love with “Torture.”

For instance, there is a lot of charm in the aforementioned track ‘Encased In Concrete’ because of its speedy and visceral nature.  Even the off-kilter beat of ‘Intestinal Crank’ is enough to get you scratching your head and addicted to “Torture.”  The things that the band did on ‘Followed Home Then Killed,’ ‘The Strangulation Chair,’ ‘Rabid,’ and ‘Torn Through’ really make this album stand out.  Everything about those tracks is absolutely genius from beginning to end.  There are enough catchy hooks and choruses to get your feet tappin’ while strangling the life out of a hooker you just paid for a handjob with a toothless grin on your face.  ‘Followed Home Then Killed’ has an absolutely haunting riff, then going straight into bulldozing mid-paced death metal.  ‘Rabid’ may be my favorite track on this album because the chorus is so god damn good.  It is something I keep replaying in my head over and over again, and you know you always have something great when Alex Webster is able to play you out with his five-string bass.  I don’t want to spoil anything on the ending track, ‘Torn Through,’ but just trust me when I say it is absolutely brutal and very fitting to end an album.  In my eyes, those six tracks are the real stars of “Torture.”

Let me speak about the instrumentation and production of “Torture” for a moment.  Cannibal Corpse really stepped up their game in my eyes, and the guy that I think made the most improvements is Paul Mazurkiewicz.  Paul was never known as one of the premier death metal drummers in our time, as he was normally around just to keep the beat, but that was not the only thing he did on “Torture.”  He actually did some pretty neat and groovy things, particularly on ‘Sarcophagy Frenzy,’ ‘Encased In Concrete,’ ‘The Strangulation Chair,’ and ‘Caged…Contorted.’  I thought his drums were a bit over-powering on “Evisceration Plague,” and here he sounds just perfect.  Alex Webster is always on-top of his game, but I found it to be an added bonus when he had a few breaks all to himself in ‘The Strangulation Chair’ and ‘Rabid’ to give us fans some real meaty bass-lines.  One thing I did find surprising is that George “Corpsegrinder” Fisher seems to be a little lower in the mix, and his vocals aren’t as intelligible as on previous records, but he sounds really good on this album.  I’m not sure if it’s due to him having a ton of lyrics to spit out, but his cadences and delivery are top-notch as they always are.  I can see a lot of these songs fitting very well in a live Cannibal Corpse set, and I’m sure you psychopaths in the Netherlands for the Neurotic Deathfest are going to go nuts for them, and I know I will when they come to the Death On The Vine 2012 on April 14th.

With my disappointment in what was to be known as “Evisceration Plague,” the mighty death metal stalwarts that is Cannibal Corpse knew they had to come with something that would put every single fan on their collective asses, and that is how “Torture” came to be.  From beginning to end you are inundated with the skull-crushing sound of Cannibal Corpse that we all know and love, with even some very interesting ideas thrown into the mix.  As I mentioned before, I see a lot of these songs being incredible in a live setting, so that just speaks for how good Cannibal Corpse can be when they are at the top of their game, and by god, they are back with a vengeance.  Their groovy and catchy brand of death metal has really taken itself to new heights, and I really hope this is the direction the band continues to go in.  “Torture” is definitely for fans of all the “Corpsegrinder”-era material, and I’m sure it will also be able to gain some new fans with how well everything on this album is orchestrated.  “Torture” was one of my most anticipated albums of 2012, and after digging through every nook and cranny I could find, I was absolutely justified in feeling that way.