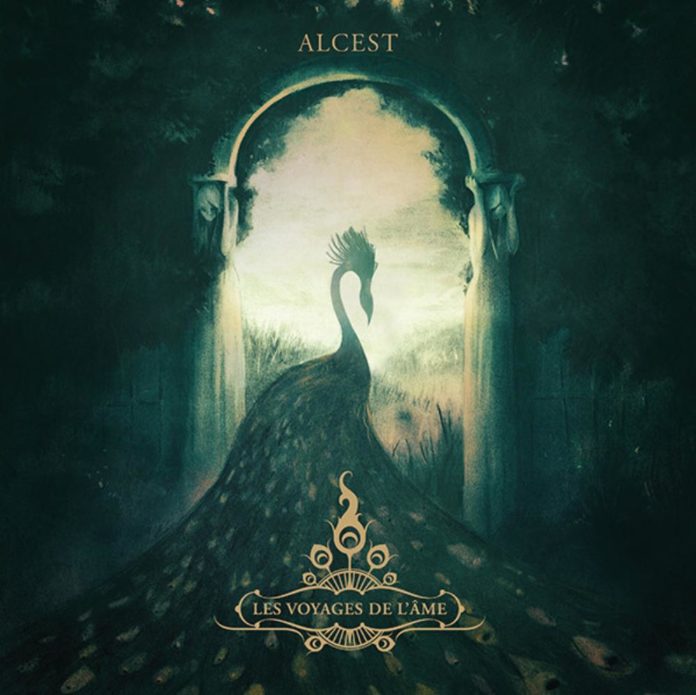 There were times when I didn’t know whether French black metal-cum-shoegazers Alcest’s new album, Les Voyages de l’Âme, belonged on this website. They’re often cited as pioneers in their field (the field being ephemeral, atmospheric, “post” black metal), yet of their many, vibrant faces, the “metal” one isn’t seen as often as one might expect. Sure, they’ve got enough iridescent, delicate clean passages to make me cite My Bloody Valentine and the Cure influences all day, and it’s easy to get lost in the glow of the clean guitars and soothing melodies. But every now and again a blast beat or raspy scream breaks the shimmering surface and puts the whole thing in some context. This isn’t just some wavy guitar rock relic from the ‘90s-its not afraid to be heavy or remind you of where it came from.

Such is the case with Alcest’s third full-length since their early 2000s inception. Light and dark at play is a common dynamic in several metal subgenres, but band leader and multi-instrumentalist Niege (joined by drummer Winterhalter) is able to see beyond that-his lights are radiant and celestial, while his darks plumb the depths of black metal and drudge up something otherworldly. While the screams come out less frequently than previous Alcest releases, track 2, “Là où Naissent les Couleurs Nouvelles”, provides both in measure and illustrates effectively the skill with which Niege is able to pull off his schtick. Setting the bar for best opening riff of 2012, the song begins with a layered wall of guitars and an ethereal melody before making way for Niege’s muted clean vocals. Since the lyrics are in French, the clean singing acts more as another instrument, another melodic sound that accentuates the light, ephemeral guitars, but when that first scream comes through over the top, whoa, watch out, you’re not out of the frostbitten woods yet.

The title track takes on a wistful waltz that can only be described as melancholic. Tracks like this demonstrate the important role the album’s production plays-it’s lush and vibrant enough to bring out the full capabilities of the guitars and synths, and low enough to accommodate the rumble of the double-kick and the melodic basslines, but distant enough to capture the dreamlike tone of the music. When that synth wave crashes over you halfway through “Les Voyages de l’Âme”, it feels like a summer daydream come to life.

The instrumental “Beings of Light” takes the Alcest boys into post-rock territory, with wordless vocalizations layered over one another as a breakneck drum beat rockets along like Mr. Toad’s wild ride. Though the band is Niege’s solo project through and through, credit is due to Mr. Winterhalter-never one to overplay, he’s capable of holding back or blasting forth as his bandmate commands. He remains tight and supportive of the song as a whole throughout the record-capable of driving the song when necessary but just as willing and able to hang back.

Things come to a dizzying crescendo with the final track, “Summer’s Glory”. It nails all the beats of a great last song-the massive intro riffs seem to say, “Well, time for us to be moving along”, as the drums pound towards an inevitable conclusion. Finally it all comes crashing down, like the windows are being thrown open and light is being let in for the first time. A fitting farewell from metal musicians more adept than most at playing in the sun.

Overall, Les Voyages de l’Âme is a terrific refining of the Alcest sound, executed more competently than ever. If you’re not afraid to suspend a thirst for the evil, the boys from France would be more than happy to demonstrate that sometimes, it pays to be good.