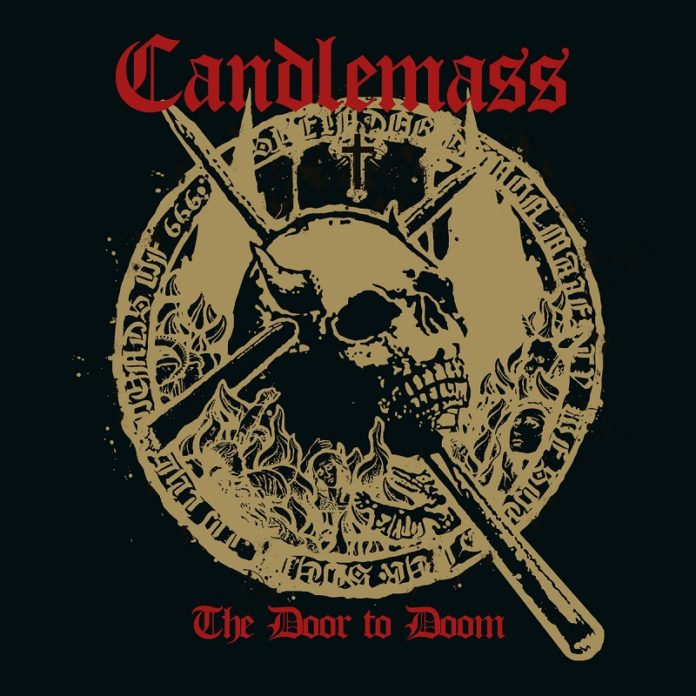 On February 22nd of this year, doom metal fans rejoiced as the long awaited 12th studio album from Swedish icons, Candlemass was released.  The Door to Doom features the return of original lead singer Johan Längquist, who left the band almost immediately after their landmark debut Epicus Doomicus Metallicus was released in 1986.

Somehow I missed the boat on Candlemass. In ’86 I was just getting out of my glam metal phase and transitioning into thrash metal.  All I cared about was speed.  The faster the better.  Even though my introduction to metal was Black Sabbath’s Paranoid, thrash grabbed me hard when I was seven, and I had no time for slow, heavy, dirgeful riffing and lyrics about death and doom.  Although I’ve always had an open mind to all forms of metal, throughout the years the black and doom genres never really appealed to me.  That was a big mistake on my part.

When I was asked to review The Door to Doom, I had no idea what to expect.  Not being a huge fan of the band (or, for that matter, of their entire genre) I knew that I had some homework to do.  So, in order to avoid being accused of not knowing what the hell I’m talking about, this week at work I’ve done NOTHING but listen to Candlemass’ back-catalog (sorry about that, boss).

Candlemass’ new release, The Door to Doom, takes me back to Dio-era Black Sabbath. I wanted to avoid that comparison, but it jumped out at me right from the opening track Splendor Demon Majesty. And let’s face it, it’s not a BAD comparison to be made at all.  It wasn’t until the third track, Astorolus – The Great Octupus, that this album really hit me.  The opening drums, leading into that heavy crunching riff reminds me of why I got into Metal in the first place.  Metal doesn’t have to be fast and loaded with flashy guitar tricks.  Metal only needs to be HEAVY, and this track defines that.  As an added bonus it also features a solo from the maestro of metal, Tony Iommi.  To say this song is a new favorite of mine is a large understatement.  I can’t get enough of it.

Speeding things up a bit with Death’s Wheel, the band finally stops reminding me of previous stuff I’ve heard, and begins to impress me with their own sound.  The groove to this song adds a more mature direction to the overall song arrangement, and I love the time changes and its overall structure.

Production wise, things are relatively decent.  The vocals and guitars are very pronounced and clean, and the drums sound great.  My only complaint here is the bass tracks, as the bass is either lost in the mix, or bassist Leif Edling is only playing along with the rhythm guitar.  I’m not hearing any of the distinct runs or grooves that you’d think a band that is so heavily influenced by Sabbath would do.  As a bass player, I find that odd and bothersome.

My only significant criticism of the album would be the lyrics.  While I’m admittedly not the biggest doom metal fan, I am a fan of horror and the occult.  I thought most of these songs were a bit lame lyrically.  Cliché stuff regurgitated to fit the musical tone.  If ancient gods and demons, apocalyptic futures and death are your thing… which I assume it is if you’re a doom metal fan, then this album is for you.  Since I really care about lyrics, I found myself shaking my head at the content in every song.  I’m afraid that might keep me from coming back to this album on any long term basis.

Reader Rating0 Votes
Good production
As heavy as it gets
Cringe-inducing lyrics
3.5