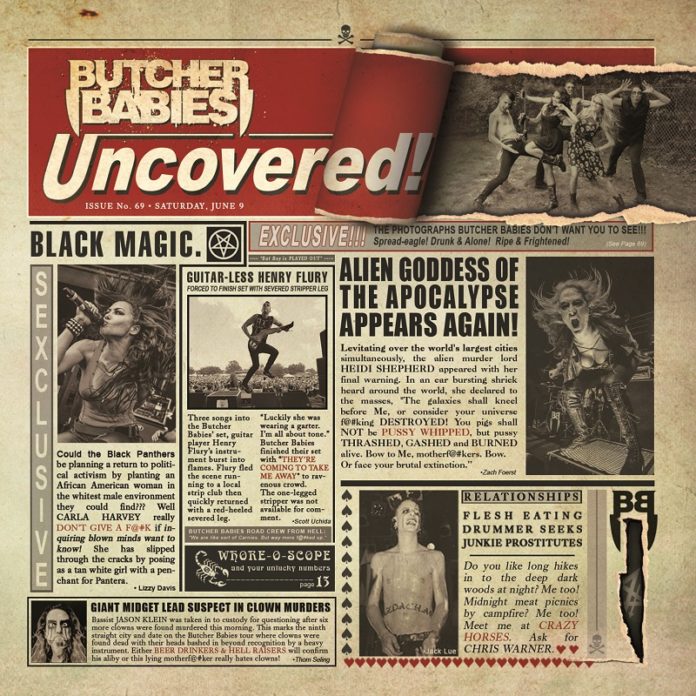 I have taken a lot of swings at Butcher Babies before. I see them as shitty gimmick band that owes all of its fame to the fact that their singers happen to have huge breasts, and who seem to be proud of pretending to represent “female liberation” while just happily complying with every single demand of an objectifying male crowd. Of course, their breasts might be just a bonus, provided their music is good. The problem is that it isn’t, and Uncovered, their latest EP, just proves it.

At some point at the Butcher Babies HQ, these people got together, picked some classic tracks and decided to smear shit all over them. Really, that’s basically what you’ll find here; they grabbed good music and covered it in shit. Actually, it’s worse than that; I think that if they had just grabbed the original vinyl pressings, squatted, unloaded a massive pile of human feces on them, took pictures, and published them, it would still have more artistic merit than this syphilitic crap that they, for some reason, decided to call “an album”.

Have you ever wished that Phil Anselmo was actually two undistinguishable and unremarkable female singers whose voices are so processed they make aerosol cheese look homemade? Well, then you’re in for a fucking treat. Heidi Shepherd and Carla Harvey seem to be devoted to just imitating Anselmo, so much so that maybe they should have just covered Cowboys from Hell in its entirety.

Covering a classic song is hard work. You can always be accused of just copying the original and add nothing (like Metallica’s rendition of Lynyrd Skynyrd’s “Tuesday’s Gone”), or of just destroying it (see the boring and heroin-infused HIM version of “Don’t Fear the Reaper”). Still, some bands manage to make someone else’s song their own; Johnny Cash did it with “Hurt”, Iron Maiden with “Women in Uniform”, and Marilyn Manson with “Sweet Dreams”. For the most part, Butcher Babies wanted to go beyond these simple categories, adding “infected the original work with an STD and then took a shit on it” as a possibility. If you don’t believe me, just wait until you listen to their cover of ZZ Top’s “Beer Drinkers and Hell Raisers”; it’ll be like looking at the fucking Arc of the Covenant.

They even managed to destroy “They’re Coming to Take me Away”, even though they could have just taken cues from Neuroticfish‘s amazing cover.

Even when their renditions seem to have potential, like their version of The Osmond’s “Crazy Horses”, they don’t waste any time in just throwing all of their efforts down the toilet. Breakdown after breakdown, they completely destroy the rhythm of the songs and make listening to an otherwise passable cover a truly excruciating experience.

On their defense, their cover of Suicidal Tendencies’ “Don’t give a fuck” is really faithful to the original… at least in the sense that the original was also fucking terrible.

It doesn’t help that instrumentally they are simply not remarkable. All of their songs seem to follow the same simplistic formula and, somehow, end up sounding the same. The fact that they managed to sound monotonous while covering 5 different songs by 5 different artists is really an achievement on its own. There’s also the fact that I can’t really speak of “influences” here, as much as I can talk about imitation. Butcher Babies seem to have just downloaded the discographies of 5 Finger Death Punch, Pantera and Rob Zombie and said “alright, that’s what we wanna do”.

Congratulations Butcher Babies, you lowered the bar and then failed to reach it.

Don't listen to this. I know you think I'm trying to be funny, but I'm serious. This album is a piece of shit and you should just stay the fuck away from it.
The booklet can be used as a fan in summer, or burned in winter.
The CD can be used a frisbee.
You can use the jewel case to replace a broken one.
Very processed voices that still sound like shit
Boring music
A constant imitation of Pantera
0.1