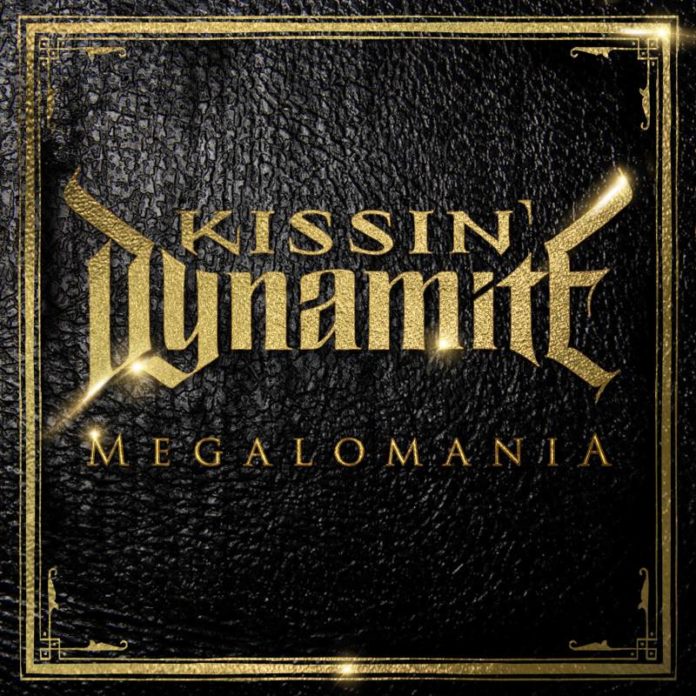 The only experience I’d had with Germany’s Kissin’ Dynamite prior to this review was a few listens to their second record, Addicted to Metal, just after it came out a few years back. At the time I thought it was a decent but overproduced effort that showed a lot of potential in a heavy metal/hard rock vein. So when I began listening to this latest full-length, Megalomania, I was a bit shellshocked with the opener, “DNA”, being such a pan-metal song, with touches of Rammstein-esque industrial, pop metal hooks, and pounding hard rock choruses. While the band I heard on Addicted… was a fairly straight forward animal with traditional influences, 2014’s Kissin’ Dynamite seemed to be an entirely different beast.

That pan-metal approach permeates the entire album, with nods to all sorts of different genres popping up all over the place. While one would assume the such a release would sound schizophrenic, they’ve written songs that make it all work… at least most of the time. The lyrics are laughably cheesy, and the choruses are occasionally so uplifting that they make Helloween look grim, but each song is infectious in its own way, and vocalist Hannes Braun sells the hell out of every vocal passage. He’s clearly very skilled at using his voice to create and compliment the different textures of the music.

Sadly, things fall apart by the end of the record. The weirdness of all of the different styles colliding just becomes too much and the last three songs just sound like a pulpy, greasy mash that is just too much to bare. I can’t even put my fingers on why exactly I feel that way, I just know that come “Legion of the Legendary” it just feels like total sensory overload. I’ve tried several times to keep the album rolling for its entire run time but I just can’t cope with the last three tracks. I even have a feeling that someone involved realized that those last three tracks needed to be put at the end for the sake of the rest of the record.

A real strength of the record as a whole is its production. Its all about big guitars and big choruses. In fact, this album sounds like a 21st century Dr. Feelgood, with everything sounding fat and percussive but stunningly clear all at once. It’s the kind of production that was needed for all of the different effects and instruments to mesh together, and it’s really quite miraculous that everything sounds as clear as it does.

It’s actually shocking how well the album as a whole works. From the crazy electronic effects, to the symphonic flourishes, to the balls-out guitar work, it actually makes it through 27 minutes before just collapsing into a bloated heap. Although there are better albums that manage to avoid this bloating, Megalomania needs to be given at least one point for ambition and creativity. All in all, Kissin’ Dynamite have crafted a unique, powerful document that, despite its flaws, is certainly worthy of any hard rocker’s attention.

This a big, brash, bold record that, while far from perfect, is deserving of attention and recognition.
Big production and big ideas
Hannes Braun is a vocalist that sells the hell out of every note he hits
The first 27 minutes are a blast.
Really, really cheesy
Occasionally laughable lyrics
The final 12ish minutes are a bloated mess.
3.5

Will The Thrill – Sorry to Disappoint Ya