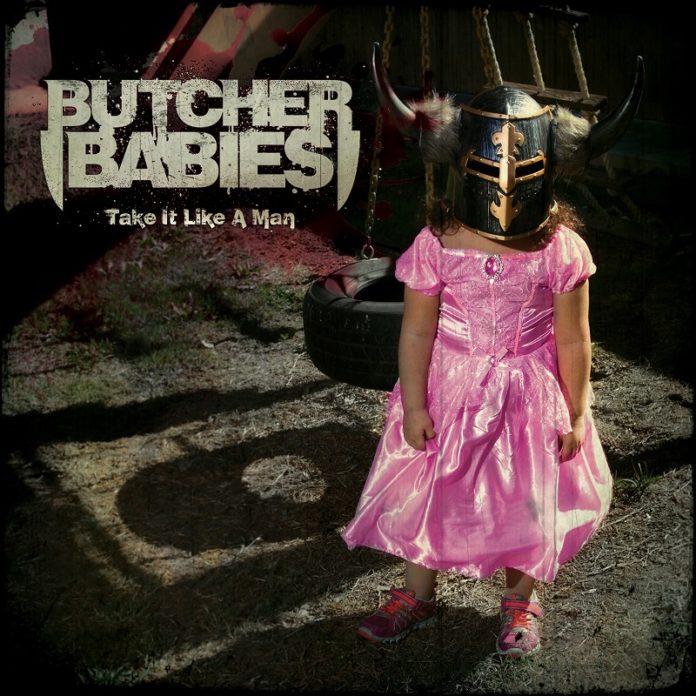 Gimmicks are not new in metal. From Manowar’s homoeroticism to Venom’s faux Satanism, many bands have tried to appeal to a certain niche by exploiting tropes. Butcher Babies, a shitty band from the United States, use tits as a gimmick. It’s transparent, everybody knows it, but they tend to give them a slide because, you know, tits.

Musically, Butcher Babies belong to a new-wave of American merchcore where looks and marketing are at the forefront, with music being only an afterthought for the performers and the label. Music as shallow as the tequila shots that these people’s mothers chugged down during their pregnancy, and which aims at nothing more than lowering the bar a little bit more every day.

Take it Like a Man is the second full-length album by this syphilitic quintet, and stands proudly as a monument to how the sausage-fest that is the metal community can give a couple of imbeciles a pass exclusively because they used to perform half naked. It’s kind of the same reason why Youtube videos with thumbnails of breasts get millions of views; people know that there won’t actually be anything worth seeing there but, you know, tits.

Recently, in an interview, singer and Girls Gone Wild reject Heidi Sheperd expressed how it has been difficult for them to succeed, since “people immediately dismiss a band because there are girls in it.” The fact that someone who has made a fucking career out of playing into every single misogynistic expectation of women in media even dares to claim that her rejection is due to misogyny is so fucking stupid that it borders on being offensive.

Angela Gossow, Tarja Turunen, Masha “Scream”, Floor Jansen, Alissa White-Gluz, all of them women, are accepted not in spite of being women, but rather because they are talented at what they do. The reason why Butcher Babies are a fucking punchline is simply due to the fact that their very existence is a fucking joke. The music is shit, repetitive and derivative. When they don’t sound like a sad excuse for a Pantera or a Five Finger Death Punch cover band, they’re just repeating the same shitty sound over and over. You know how I know this? Because while I was listening to Take It Like a Man I often didn’t even realize the songs were changing. It was basically the same song divided into 3 minute bites, without even a shred of an attempt at making things differentiate from each other.

The songs seem written during a stream of consciousness, all of them the kind of mosh pit anthems that are destined to be played around noon at your local open air festival. You know, when nobody really gives a fuck about who’s playing, but they wanna get to the front of the stage to wait for the headliners and “well, fuck it, I’m already here, so I might as well mosh.”

The album has basically everything that I detest. From Evanescence-esque soft vocals in “For the Fight,” to innumerable breakdowns in “Monster’s Ball” (and every other fucking song), as well as the still unexplained reason why a band would keep two completely indistinguishable singers on the payroll. It’s one thing if you have a man and a woman (like in Lacuna Coil), or singers who do different styles (like the different vocal performers in Avantasia or Therion), but here it’s just two performers who are completely indistinguishable from each other. At no point you go “oh, that’s Heidi” or “that’s the one that isn’t Heidi”; they’re so goddamn generic, and their voices are so over-processed, that guessing is just as effective as flipping a coin. You really can’t tell them apart. It’s like Lassie: you’re pretty sure it might be a different bitch, but you can’t really be sure.

Just like Baby Metal, Butcher Babies are a band that just didn’t need to happen. Unlike Baby Metal, however, they don’t have the excuse of being children being exploited by someone else. There’s no reason why anyone without some sort of degenerating brain disease should listen to, let alone enjoy, this piece of shit.

IN A NUTSHELL
Those looking for doom-tinged blues/heavy rock might as well give it a try, considering how slim their pickings are.
POSITIVES
It's not catchy. You won't be stuck with this shit once you're done.
NEGATIVES
Everything. There are no redeeming qualities.
0.1

no one commented on this. i’ve seen essays on feminism and shit in the comments here.

anyways, i totally agree that their music is terrible. i’m going to listen to some amon amarth and pretend i’m a viking.