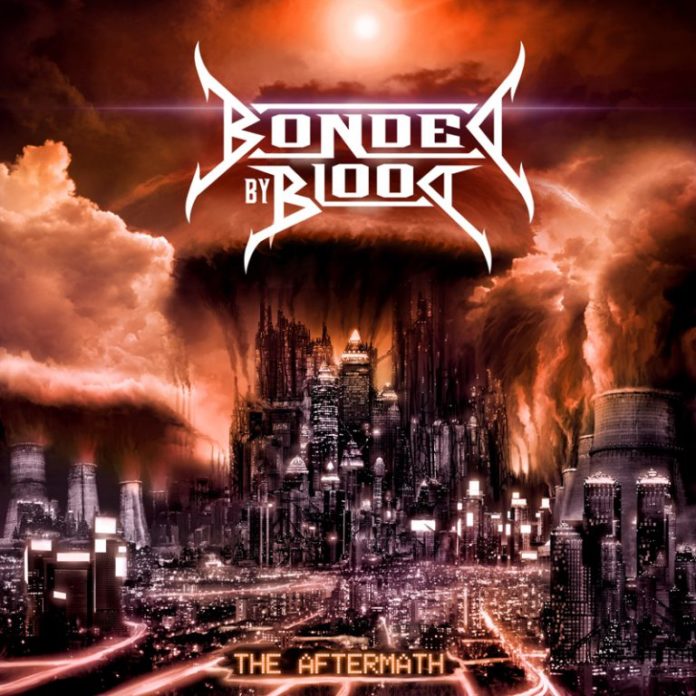 I think by now we have all realized that this so-called thrash resurgence of the past decade has created a large crop of bands who wish to throw their hats in the ring to see who can play the same riff better than all the others.  There have been very few thrash newcomers who have been able to hold my attention (such as Gama Bomb and Antichrist), and Bonded by Blood has never been one of them.  I’ve always found their brand of thrash to be the same rehashed tripe that we have heard before that would bore me to tears.  It is possible that since the band are now what could be considered as “seasoned veterans” of the heavy metal scene that they have picked up a few new tricks for their music.  While I am going into their new album titled “The Aftermath” with a fair bit of skepticism, I realized that if Cattle Decapitation could finally make me a fan, then anything is possible.

From the very beginning of ‘I Can’t Hear You’ do I realize that my skepticism was certainly warranted because there is so very little to talk about.  To get the minimal praise out of the way, I’ll say that ‘The Aftermath’, parts of ‘Crawling in the Shadows’, the solo in ‘Repulsive’, and ‘Among the Vultures’ are passable at best, while everything else couldn’t have been a bigger waste of time.  What Bonded by Blood has given us is yet another soulless thrash record that is already tired and worn before you even press play since generic Destruction and Testament riffs can only take you so far before getting on my nerves.

The two worst offenders on this album has to be vocalist Mauro Gonzales and drummer Carlos Regaldo.  Those two turn the effort put forth by bassist Jessie Sanchez and guitarist Juan Jaurez into an unbearable mess for most of the time.  Both Gonzales and Regaldo do absolutely nothing to help further the music along, and when a good riff does come into play (such as ‘Show No Fear’), they just play it safe and give no aggression what-so-ever.  It’s just the same boring crap that makes me loathe the majority of modern day thrash, yet Bonded by Blood is still being lauded as some great force to be reckoned with when they put out garbage like this.

The production of “The Aftermath” is actually pretty good… it’s just a shame it was wasted on this.  Anyway, the best thing about the production is Jessie Sanchez’s bass.  Not only is his performance the highlight of the album, but he is crystal clear throughout the entire thing.  Everything else is certainly distinguishable enough for a thrash album, and normally the drums being triggered to high hell would annoy the piss out of me, but they sound pretty damn good.  And that ends my prerequisite for talking about the production.

When the best song on your album is a cover of ‘Killing In The Name’ by Rage Against The Machine, then you have some real problems that need to be worked out.  I had to keep restarting songs because of how horrendously boring they were, and that alone is a death sentence for any band.  This is just another nail in the coffin for Bonded by Blood in my eyes, and I guess it’s about time I stop giving them chances to win me over.  Trying to get through 45 minutes of this schlock is difficult enough, but having to write 613 words about how worthless it is happens to be far worse.   Folks, do yourselves a favor and save your sanity by skipping “The Aftermath” all together.