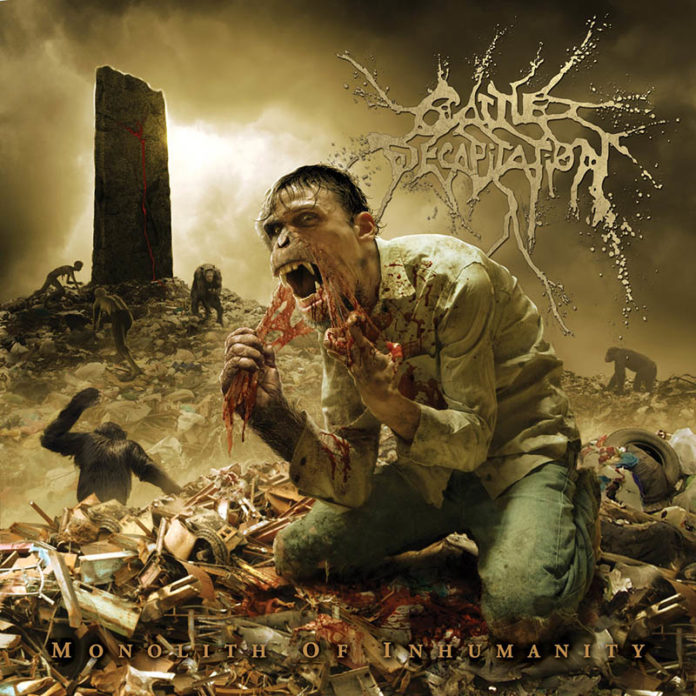 Ever since Cattle Decapitation announced that they were working on a brand new album I knew this was going to be one of the most anticipated releases of this year… but not for me.  You see, I have always been rather dismissive of Cattle Decapitation.  Their early sound just never resonated that well with me as I found it to be hackneyed and stale, making me wish I would have found something more constructive to do with my time.  Because of that I had essentially ignored their existence… until now.  Last week the band had released a music video for the song ‘Kingdom of Tyrants’ and it immediately caught my attention.  Not only because of the incredible visual direction, but the band had been able to craft a song that I really enjoyed.  With this new revelation I became rather intrigued about what else may lie within “Monolith of Inhumanity“.

What I found in the guts of “Monolith of Inhumanity” was certainly surprising.  The opening track, ‘The Carbon Stampede’, does a lot to help destroy the previous notions I had once held for Cattle Decapitation.  After the initial introduction, the band comes screaming forth in a brutal and grinding fashion.  An interesting fact I found is that all of the current (and even some ex) members of Cephalic Carnage do guest spots in the gang vocal portions of ‘The Carbon Stampede’, which sounds ridiculously good.  After such an excellent start, I couldn’t help but to wonder if the rest of this album may pale in comparison.

As it turns out the surprises kept coming, as Cattle Decapitation were able to do far more right than wrong on “Monolith of Inhumanity“.  If there is one thing I need to give them credit it on it is being able to spread their wings and not be confined in the small box that is death metal/grindcore by adding a lot of new elements.  You’ll hear smatterings of melodic death, progressive, thrash, brutal death, and black metal throughout this album.  Being able to take all those different ideas and influences and make them work is exceptionally difficult, but Cattle Decapitation were able to sidestep that harbinger of death.

Tracks like ‘The Carbon Stampede’, ‘Dead Set On Suicide’, ‘Forced Gender Reassignment’, and ‘Lifestalker’ are all incredibly engaging.  But, I would have to say the final three tracks of ‘Your Disposal’, ‘The Monolith’, and ‘Kingdom of Tyrants’ are the real winners here.  They build off of that idea to use multiple ideas and make them into one “Monolith of Inhumanity” (do you see what I did there?).  ‘Your Disposal’ has a wicked black metal tinge to it that I was not expecting, and when you combine that type of riff with Travis Ryan’s vocals then it becomes one cataclysmic affair.  When it comes to both ‘The Monolith’ and ‘Kingdom Of Tyrants’, I believe they should have just been put into one track because they work far too well together, and you can watch the video I linked to in order to see my assertions being proven right before your very eyes.  I want to mention that if it weren’t for Travis Ryan’s astonishing vocal range or David McGraw’s spectacular drumming than this album wouldn’t be half as good as it is.

Despite Cattle Decapitation doing multiple things to change my perception of them for the better, I could still hear some instances where I still had causal to be worried about the overall product.  There were some instances where the band were unable to continue the intensity from one track to the next.  ‘A Living, Breathing Piece of Defecating Meat’, ‘Project Ovulation’, and ‘Do Not Resuscitate’ are the prime examples of how to not capitalize on electric energy.  The riffs in particular would feel uninspired or lacking in balls.  I do want to focus on ‘Project Ovulation’ for a quick moment, because this song should have been far better than it turned out to be.  Mike Majewski (Devourment) did guest vocals on it that sounded fantastic, but the music itself was akin to a lifeless Warbringer most of the time, and his guttural vocals just did not fit that type of music.  That is a squandered opportunity if I had ever seen one.

The production values of “Monolith of Inhumanity” are flawless.  This is one amazingly clean record.  Every instrument sounds perfect, and every growl or scream that Travis emanates is soul shattering.  You can even hear the bass which is a miracle within itself.  Sometimes the riffs can get a little muddy if there isn’t a lot of variation in them, but it isn’t that big of a deal, especially when you would come to expect something like that with this type of music.  I have no complaints about the production other than that.  Good work, sound engineer!

After not paying attention to Cattle Decapitation since 2004, I was really blown away by what they showed on this record.  “Monolith of Inhumanity” may still have some of the same faults I saw with the band back then, but they have really come a long way in showing that they are versatile musicians who are more than capable of writing diverse and coherent music.  There was no way I could have predicted I would enjoy this album as much as I have, but I am definitely coming away with a new-found respect for Cattle Decapitation.  This is definitely not your average death metal/grindcore record, folks.