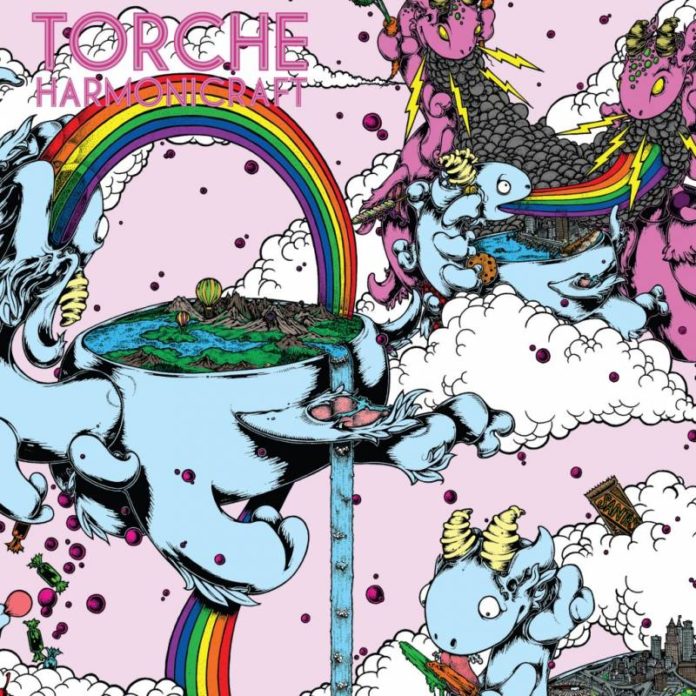 To start, a disclaimer: if you’re expecting something crushingly heavy, you should definitely look elsewhere. Torche isn’t that heavy anymore, despite what their early work and a split with Boris might have you believe. They do what they call “thunder-pop.” It’s got that trademark Orange stoner crunch in the guitar tone, but the songwriting cribs more from power-pop and pop-punk than the realms of heavy metal. They’re much more in debt to Queens of the Stone Age than Kyuss, with more of a focus on catchy hooks and foot-stomping grooves than crushing riffs. Torche was previously able to strike the perfect balance between these two disparate elements, best exemplified on 2008’s Meanderthal, but Harmonicraft sees Torche focus far more on pop hooks than pummeling riffage. It’s a distinction that certainly separates them from the rest of the metal pack, but this distinction isn’t backed up all the way with the songcraft we’ve come to expect from them.

Starting with a bang straight out the gate, the opener “Letting Go” reaches for the skies and starts to soar among the clouds like a giant pastel-colored rainbow-vomiting goat carrying a landscape on its back.* And it’s not that it declines after that – it stays up at those heights for pretty much the entire release – but there’s no real variances in the sound displayed on the album. These are all forward-rocking fuzzy chunks of power-pop ideal for soundtracking the highlight reel on your next extreme sports video,** but around halfway through it all starts to run together. Aside from the opener, the slow and catchy head-nod of “Reverse Inverted,” the arpeggiated-assisted “Snakes Are Charmed,” or the amazingly fist-pumpy “Kiss Me Dudely,”*** it’s really hard to tell the songs apart from each other. Most of them just sound like outtakes or B-sides from their previous two records, and while still being pretty good, don’t really sound that fresh.

This is not bad music by any means, but someone like me who’s wishing for something heavier like the last two cuts off Meanderthal can’t help but feel a bit disappointed. The tracks tend to blur together and become indistinguishable from one another – they’re Torche songs, and they’re pretty good Torche songs at that, but there’s just too much of the same, and it’s hard to tell one song from the other after giving the album a good listen. Fans of the direction taken by the band on the earlier Songs For Singles will be greatly satisfied by this release, but those looking for a sludgy heaviness should look to acts that still feel comfortable doing such, as Torche has moved on to different pastures. It’s still too early to tell if these are greener pastures or not, but we’re sure to find out by the next release.

*Seriously, get a load of that album cover! Wicked shit.
**Being signed to Volcom is a natural fit for them.
***If nothing else, Torche is masterful at crafting awesome song titles.