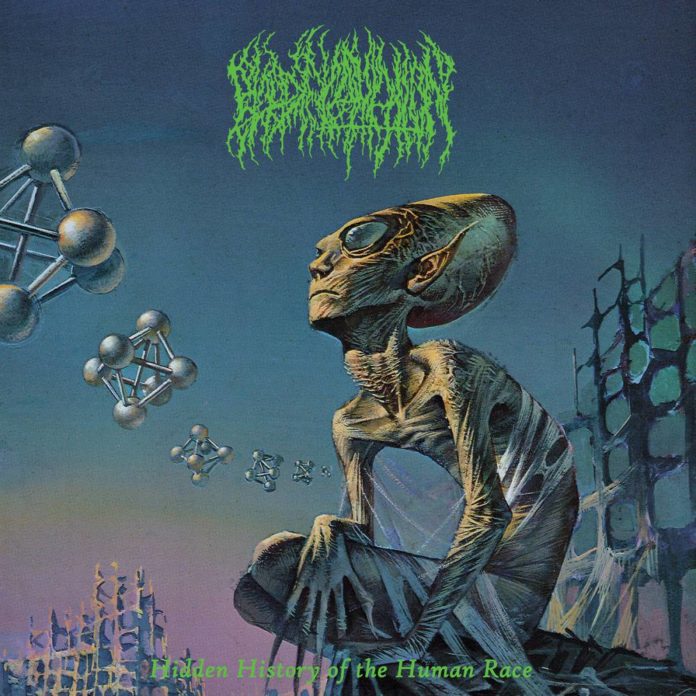 For a band that hasn’t even hit their 10 year mark yet, Blood Incantation have already made a lot of waves in the death metal scene. With two EP’s (including their critically -acclaimed split with Spectral Voice), and their debut LP “Starspawn” under their belts, they  have carved a path of cosmic destruction on the road with such acts as Morbid Angel, Immolation, and Arcturus. The second LP in a band’s discography can often prove to be a stumbling block, however, as many bands will tell you that the “sophomore slump” is a very real thing. Having conquered the road many times over, Blood Incantation look to avoid that very pitfall with Hidden History of the Human Race, the band’s latest offering on Dark Descent Records.

As with previous releases, Blood Incantation walk a fine line between technical, brutal, old-school, and atmospheric, often managing tick each of those boxes at the same time. With sci-fi themed imagery, it would be easy to compare Blood Incantation to similarly sci-fi obsessed technical death giants, Gigan, but that wouldn’t be fully accurate. While Blood Incantation shares Gigan’s propensity for ever-changing time-signatures and spacey tones, Blood Incantation often veers into death-doom territory, more in the vein of (ironically enough) Incantation. This is most evident in the second track, “The Giza Power Plant,” which starts off with heavy, technical stabs of old-school sounding death metal riffage, before veering into a more atmospheric, slower paced riff that has shades of Nile in the melodies.

Though there are only four tracks on Hidden History of the Human Race, you get the feeling that you’re being taken on a journey over the course of the record, starting with the frantically paced opener, “Slave Species of the Gods.” While the music here is technical, it never gets bogged down in the total wankfest that so many tech-death opt for; Blood Incantation have challenged the notion that avant-garde automatically means difficult (or unlistenable, depending on who you talk to). This is best represented in the closing track “Awakening from the Dream of Existence to the Multidimensional Nature of Our Reality (Mirror of the Soul).” This track alone makes up half of the record’s play-time, and is quite a journey to listen to on its own. With speedy, pummeling riffs, spacey slower sections, and washes of synthesizer in the quieter moments, Blood Incantation display an uncanny ability to move between different sounds and approaches to death metal, all over the course of a single track.

All of the band’s technical prowess and atmospheric tendencies would be wasted if the production didn’t uphold its end of the bargain, but thankfully it did. The tone on this record is extremely rich, with the hypnotic and (at times) brutal guitar-work being the main focus, while still giving the drums, bass, and guttural vocals plenty of room to breathe as well. There is an ever-so-slight reverb on the drums that give them an old-school vibe, and the waves of synthesizer and electronic sounds give the music an otherworldly quality. Fans of Incantation, Nile, and Demilich will certainly like what they hear on Hidden History of the Human Race, as Blood Incantation have created themselves an instant classic with this record. I would suggest listening with headphones at least the first time, otherwise you’ll miss the intricate little sounds that are present here, and to get ready to have this record on repeat.