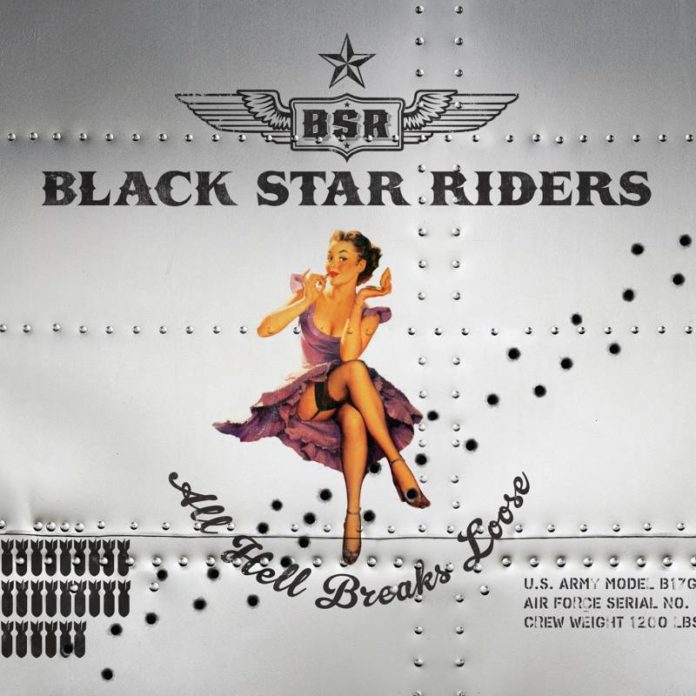 We need to get this out of the way before we continue: I am a MASSIVE Thin Lizzy fan boy. I firmly believe that between 1975 and 1983, that band wrote some of the most skillful, soulful music you will find in the Hard Rock genre. So I was excited to hear what Black Star Riders, the new band featuring members of the recent, touring incarnation of Thin Lizzy, had brought to the table. Excited, but also aware that something key would be missing without the legendary Phil Lynott’s writing, vocals, and bass playing. I firmly believe that there was a magic in Thin Lizzy that, without Lynott, can never be re-captured.To the band’s credit, All Hell Breaks Loose is a great album all on its own.

It’s a remarkable thing to hear when a band strikes a balance between serving the past and creating something new. The album has an almost Celtic folk quality to it, with structures that are upbeat and at points even danceable. Lizzy had dabbled in folky structures (See: “Whiskey in the Jar”, “Freedom Song”, “Southbound” etc.) but it was never an upfront, integral part of their sound (at least to the extent that psychaedelia and straight up rock were). It’s an interesting change of pace from the later, heavier Thin Lizzy works. This is likely the influence of Scottish frontman Ricky Warwick, whose solo efforts outside of his most famous act, The Almighty, are largely acoustic and folk-influenced.

Speaking of Lizzy’s later works, heaviness was a weak point of this release. Maybe it’s just me pining for the days of old, but that heaviness in the Thin Lizzy sound was a natural, cosmic evolution for the band. While remaining firmly rooted in rock, they had flirted with heavy metal quite frequently since 1975’s Fighting LP. Those metallic tinges and influences were something I always found to be much more important to the band’s sound than the folk influences. It could just be the rivethead in me talking, but if the compositions on All Hell Breaks Loose had been just a little heavier, this could very well have been THE album of 2013.

Lack of heaviness aside, this is still a hugely professional, well written, and masterfully recorded work. Scott Gorham and co-axeman Damon Johnson are on fire, with no single note sounding out of place on the entire record. Also of interest is skinsman Jimmy Degrasso, who puts in an all-together different kind of performance to his work in Suicidal Tendencies, Megadeth, and even Alice Cooper. The man is clearly an incredibly skilled, very versatile drummer who doesn’t get the credit he deserves.

This is an album that has its flaws. So what. Thin Lizzy had its flaws too. But they were part of a big, beautiful hard rock package and the flaws were just as important as everything else. So while this may not be Jailbreak, Black Rose, or Thunder and Lightning, it’s still a damn fine body of work. One that I’m sure will dominate my stereo for months to come.