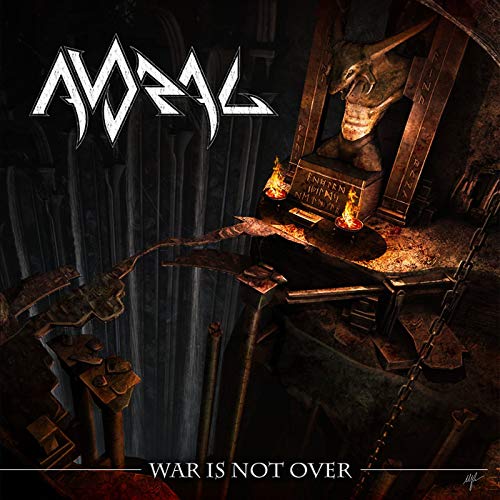 Italy’s Avoral want to make epic music. That much is clear. It seems to be, however, that they are not completely sure as to how they want to do it. There are plenty of Celtic instruments thrown into the mix (I get hints of bands as dissimilar as Eluveitie and Heidevolk), as well as some death metal growls, straight-forward heavy metal riffing, and the narrative style of the likes of Blind Guardian and Rhapsody.

This attempt at doing everything in a fairly limited space (this debut album barely clocks 40 minutes) makes the listening experience feel like everything was thrown in a bit haphazardly. It’s not that the sound is necessarily bad (although the horrible tin-can production does not help in that department) just that it’s hard to know what exactly they are trying to do.

While for some bands an eclectic sound can be an asset, it does need to be joined by a common element. While vocalist Ged should be the man in charge of that job, his voice is just not up to the task. In what sometimes comes off as an attempt at imitating Grave Digger, the delivery is at times bad enough to make you wince. His Chris Boltendahl sometimes sounds more like Alestorm’s Christopher Bowes, and that’s never a good thing.

Vocals alone are not the only clear throwback to Grave Digger, as the music often seems to be also aimed in that direction. Sadly, the execution is not good enough, and the melodies just sound generic (the instrumental intermezzo “The Dark Cave Melody”) sounds like any of the dime-a-dozen royalty free “heavy metal backing track” that you can find on Youtube) making the whole effort feel quite mediocre.

Back in their homeland, Avoral have opened for the likes of Dark Moor and Haggard. Sadly, right now I can’t see them going beyond a “local opening band” slot.

Avoral – War Is Not Over
Reader Rating0 Votes
2