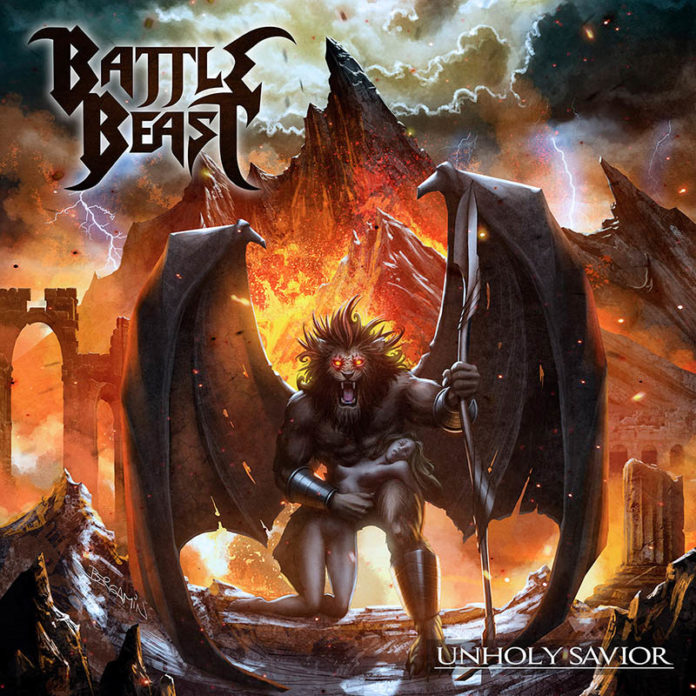 Conveying power through metal is not as simple as some people might think. Although you can pass a message of aggression by just getting the fastest drum machine in the market, conveying an epic feel takes a lot of effort. It is such a monumental effort, actually, that most bands will only give it a shot in a few random songs (like Edguy in “Vain Glory Opera” or AC/DC in “Hell’s Bells”) instead of trying to make it a constant element of their sound. Battle Beast seem to have aimed at achieving the exact opposite, going as epic as all fuck from the very beginning, and never letting go.

Battle Beast’s sound is what you would expect from a band that has devoted songs to an anime (Berserk, if you’re curious). There is a constant sense of urgency and majesty, a larger-than-life vibe that permeates everything. True, it can get to be a bit campy (this is anime, after all) but considering I’m the kind of guy who bitches about the additions made to The Hobbit movies (“Legolas has not fucking business being there, goddamnit!”) I’m not the one to complain.

Battle Beast’s feat, however, is not merely to go full-epic on their album (after all, Manowar have been doing that for decades) nor is it the fact that they clearly cater to my nerdy self (I’ll always have Blind Guardian for that). It’s that they have made a truly memorable heavy metal album, full of the kind of power that most bands can only dream of achieving. Noora Louhimo’s voice is just amazing throughout the whole effort, shrieking a wonderful vibrato that I can’t seem to get tired of (just listen to “Lionheart” or “Speed and Danger” and you’ll see what I mean). Her voice is the absolute star here, since it is just so goddamn powerful that you’re basically compelled to pay attention.

The band as a whole works well together, and you can get a clear idea of what they were trying to accomplish. Their influences, after all, are made clear from some of the songs. Personally, I got a clear vibe of Lordi in “I Want the World… And Everything in It” (my favorite song by far, and not just because of its Scarface reference), as well as plenty of Sabaton, particularly in the use of keyboards as more of an “ambient” element than anything else. (and believe me, they do that really fucking well).

The album does fall short with the very forgettable “Sea of Dreams”, a power ballad that at times reminds me of Elis, during the tenure of the late Sabine Dünser. Although Noora’s voice eventually moves away from the monotonous slow territory in which she finds herself during this track, her shrieks are unable to save this song. It’s not that the song is bad (about 10 years ago, when I was discovering Elis I would have totally listened to it with my goth ex) but it’s just too similar to many others that sound just like it; also, it seems really out of place in an otherwise powerful and fast-as-all-fuck album. A similar thing happens with the closing “Angel Cry”, which even though is not as cliché, does seem out of place. Although both songs do allow Noora to show a different side of her voice, it was not really a side I was interested in exploring.

Unlike what often happens when I review an album, Unholy Savior has been something I have truly indulged in. Although there are some flaws (like the campy, synth-covered, 80’s-sounding “Touch in the Night”) these are not enough to justify passing on this album. It might not be perfect, but it sure as hell is good.

Battle Beast, thank you for starting us on 2015 on such a great foot.

A great album that, despite a couple of shortcomings, you'll be happy to listen to.
Powerful vocals
Epic ambient
Two unnecessary ballads and a very cheesy 80's throwback
4.5