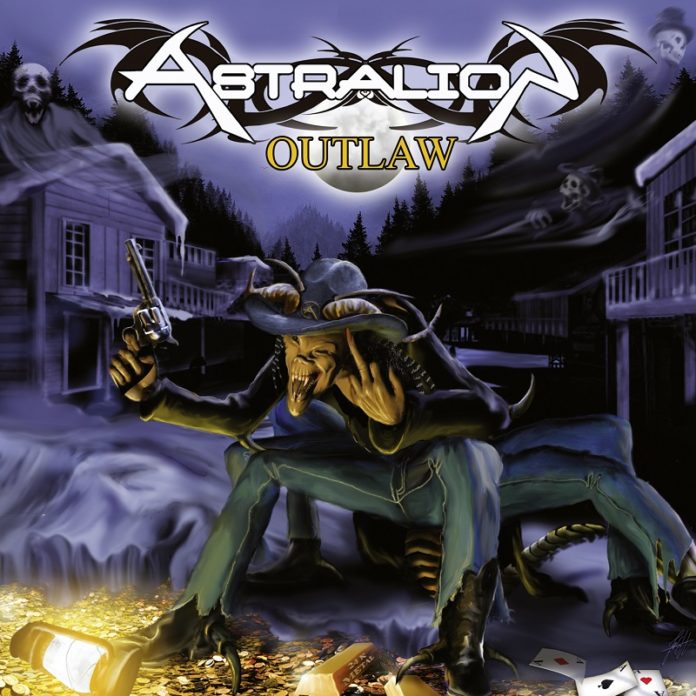 Born in a pub in Southern Finland five years ago, Astralion set forth into the world of power metal with the motto, “Forget the dragon, forget the sword – here’s the true power from the chord.” 2016 sees the release of their second album, Outlaw which lacks dragons and swords as promised, but has troubles delivering the true power.

Right out of the gate, Astralion show serious influence from Stratovarius; a handful of tracks sound like they were ripped straight out of Dreamspace. The album attacks with unbridled energy, thrashing out with breakneck percussion and stomping guitar riffs that kick into lightning solos on a dime. Drawn out and high-pitched vocals accompany the relentless tempo to provide an interesting foil in the pacing; contrasting speed with the slow and steady method. Even the keys fire off with wild synth sections and then drop down to calm acoustics. While the flavourful contrast and endless energy are welcome qualities, a lack of purpose and direction hinders the performance.

The most unfortunate aspect of Outlaw is predictability. The majority of the tracks follow the formula of the band playing hard and fast, followed by a guitar solo right before the end, and concluding with a verse from the intro. The consistent structure of the songs makes a large portion of the performance redundant and left me wondering why I should bother listening to the rest of the tracks. There are a few numbers that throw in unique tricks, but it’s mostly cheesy sound effects that attempt to add a Western theme with gunshots and the clomp of hooves which is a part of the next snake in the album’s boot.

The theme in Outlaw is confused and seems as if it was pulled in a variety of directions. Judging by the cover art, the aforementioned sound effects, and the band posing as cowboys in photos, I assume there was supposed to be a strong Western theme, which although could have been slick, just wasn’t there. Instead, the album carries a typical fantasy feel that is torn between upbeat rhythms and melodies, and unsuitably dark lyrical content. By themselves, there is nothing wrong with any of these elements, but they were applied to the album with all the care of a child finger painting.

Don’t get me wrong, single tracks off of Outlaw sound good, but the album is not cohesive. Astralion possess plenty of talent and skill when it comes to handling their instruments, but lack creativity in the structure of their songs and direction in their music. I have no doubt that Astralion could put on a fantastic live show, but I can’t imagine sitting down and giving Outlaw consecutive spins.

IN A NUTSHELL
If they're swinging by your local Finnish pub, give them a listen.
POSITIVES
Competent musicianship.
High energy.
NEGATIVES
Directionless.
Mish-mashed elements that don't work.

Marilyn Manson – We Are Chaos