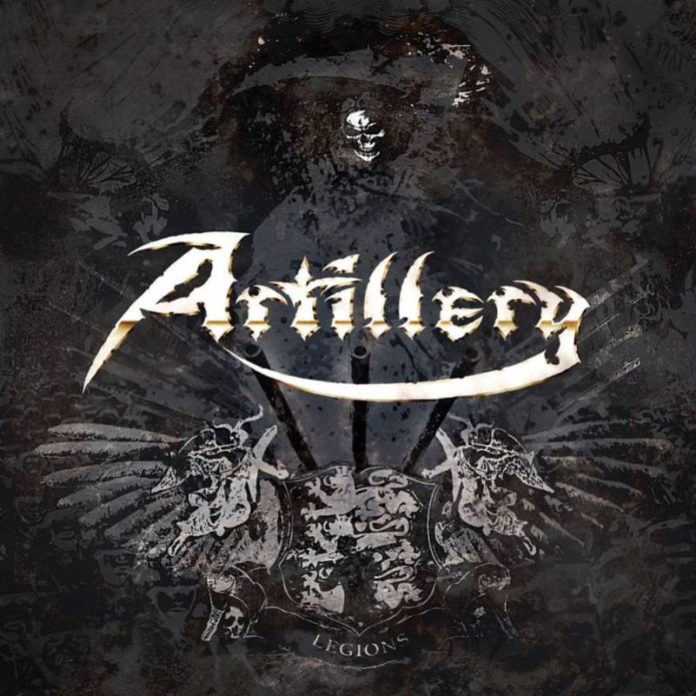 Danish thrash institution Artillery has come thundering back with a new singer and a new release for 2013. It’s been 28 years since they dropped their debut warhead on the metal masses and in that time we’ve seen the band evolve from a standard but effective thrash merchants into a more technical and experimental unit. On Legions we see the boys adding another layer to their assault by reaching into the more nuanced and melodic realms of traditional metal: an experiment that, in this writer’s eyes, yields some explosive results.

Michael Bastholm Dahl (of Ripe fame) lends his Zak Stevens (of Savatage and Circle II Circle) meets Ronny Munroe (of Metal Church) pipes to this latest Artillery opus ((Replacing Søren Adamsen, who had been with the band since 2007.)), his high-flying vocal acrobatics lending a new texture to this machine. While original vocalist Flemming Rönsdorf’s vocals were of a very Euro-thrash nature that suited the band in the ’80s, I doubt he could have effectively conveyed the emotion required for a semi-ballad like “Enslaved to the Nether”. Dahl, on the other hand, allows the band’s writing to soar, the song becoming one of the finest I’ve heard this year.

Elsewhere you’ll find the typical, middle-east-tinged speed metal that one has come to expect from the Stützer brothers. Some of this is truly brutal stuff that recalls the bands fastest material, songs like “God Feather” undoubtedly capable of starting a living room mosh or two. There’s definitely light and shade at play this time out, the band balancing said blitzkriegs with subtler tones and textures.

It’s not a perfect package though, the two tracks right in the middle of the album (“Global Flatline” and “Dies Irae”) being a bit bland. Not to mention a mix that I found, at times, to be a little cacophonous, certain frequencies sounding too close to one another, not giving the instruments room to breathe. This problem only rears its head in the more chaotic moments on the record, however, and is easily overlooked.

It’s always nice to see a band like Artillery, who made a name for themselves as an band unafraid to try new things (within the confines of thrash anyway), still willing to experiment with their style. A clean, traditional metal vocal style is definitely something that has paid off for the band, as Legions is a fine piece of work. It doesn’t knock By Inheritance off of its throne as the band’s magnum opus, but it’s a worthy addition to their catalogue.