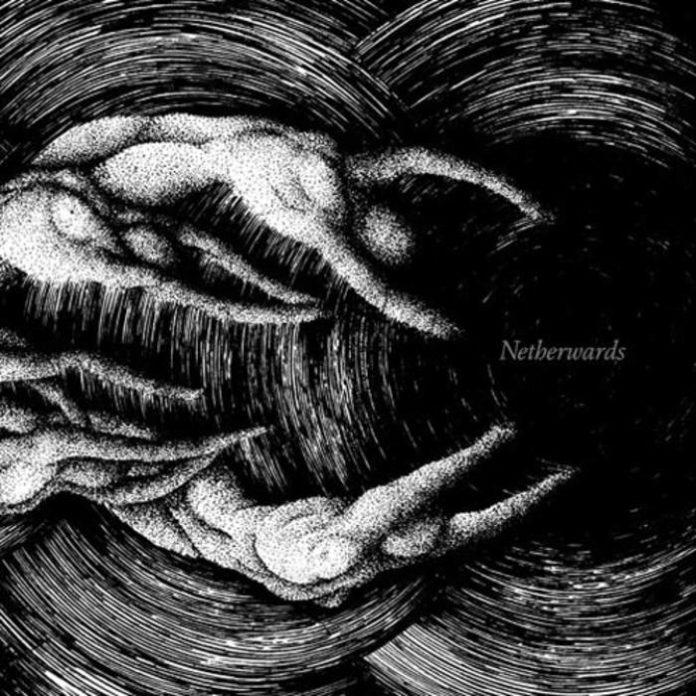 I’ll be the first to admit that I don’t know the first thing about doom metal.  The only time I even come in contact with it is when I’m listening to Hooded Menace and other similar ilk.  I know that may sound quite shameful, but every once in a while I like to step out of my little box that is draped in entrails and venture out into the wilderness of unknown music.  On my journey today I have found a bog hidden deep within the woods where dying trees with decrepit limbs and black leaves are its inhabitants.  As the fog rises off of the the murky-and-moss covered water, all I can see is darkness.  A darkness that envelopes my entire being, surrounded by nothingness.  A hollow and empty existence.  I am an Anhedonist.

One of the ways anhedonia is described is as follows:

If that isn’t an appropriate description of Anhedonist‘s debut album, “Netherwards“, then I don’t know what could be.  “Netherwards” is an album that should not just be listened to, but lived through, as well.  I am the type of man that loves to really get deep into the guts of an album, and this one was no different.  I turned off my lights, shut the blinds, locked my door, and laid down on my bed.  Before I even hit play on my stereo I knew this was going to be one hell of a listening session.

Hopeless.  That is the word that comes to mind when the introductory rumbling of ‘Saturnine’ ends.  Each riff sounds incredibly monstrous; a gargantuan demigod has come to crush all that you love and hold dear.  Every strike on the drums is skull-shattering.  The shrieked lyrics are enough to make ones blackened heart turn to stone.  The production would feel right at home on a Funebrarum record (specifically “Beneath The Columns Of Abandoned Gods“), which ironically enough makes me immensely happy while enduring such a depressing sound.  The next three tracks are no different from ‘Saturnine’ musically, but they each take different approaches to bring forth such a debilitating and somber atmosphere.

The haunting melodies of ‘Estrangement’ and old-school death metal attack of ‘Carne Libertus’ show that while Anhedonist play a strange hybrid of archaic-yet-refined doom and death metal, it just goes to show how amazingly well they perform their craft.  All of the vocals have just the right amount of reverb behind them, and they aren’t over-powered by any of the instruments, making “Netherwards” intensely eerie and memorable.  The finale of the album, ‘Inherent Opprobrium’, has an opening that sounds like something from a depressive black metal band such as Silencer.  The gently plucked guitar and bass notes hum in a tumultuous mixture of both evil and angelic attributes that slowly guides your mind away from all that ails you.  It is easily one of the most relaxing experiences I have had in recent memory when listening to a heavy metal album of any kind.

One must keep in mind that both “Netherwards” and Anhedonist in general is not for everyone.  They mix doom and death metal with extreme precision, but you must have patience.  This isn’t an album you can just randomly listen to one or two of the songs.  This is something you need to make into a full-scale event.  It must be listened to the whole way through each and every time.  While each song has its own strengths and merits, they become so much more meaningful when each track is working in simpatico with one another.  I can understand why this may put off some listeners, but trust me, your faith is not misplaced.

It is exceptionally rare when an album like “Netherwards” is released upon this world.  The seamless and extraordinary blend of doom and death metal is utterly intoxicating.  Anhedonist have not only toppled just about every single “heavy” band that considers their current or upcoming releases to be some of the “heaviest” material out there, but they have unequivocally raised the bar for the rest of the groups that share one single iota of their style.  These four Seattle-based souls studied their predecessors well and greatly expanded upon their work, as well as being able to give their own melancholic spin on things.  “Netherwards” has quickly shot itself up into my top five releases of this year, and I don’t see anything in the near future knocking it off of this exceptionally high pedestal.