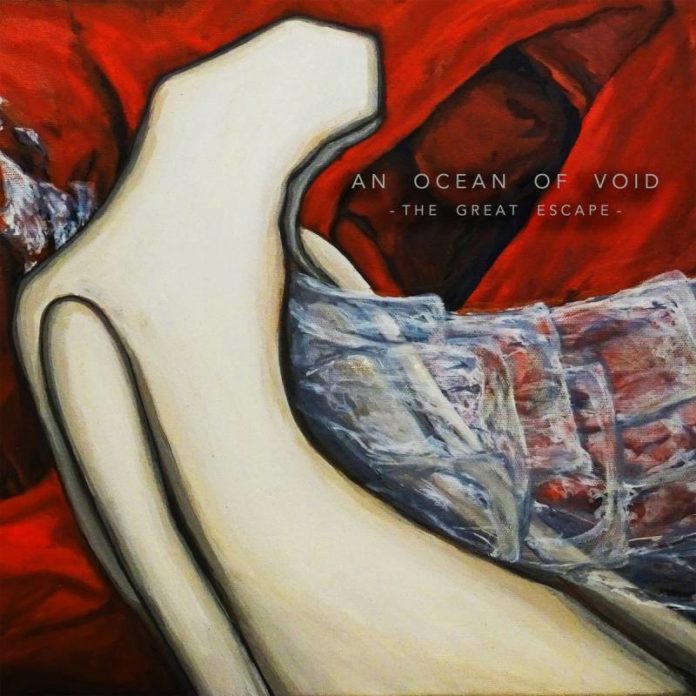 Pink Floyd had a real knack for creating haunting, atmospheric music, particularly after the departure of lead singer Syd Barrett. Futuristic synthesizers mingled with simplistic but eerie guitar-lines, creating the unique sound that gave way to progressive rock. Despite the existence of an entire sub-genre of metal dedicated to prog, it’s surprising how few bands have attempted to incorporate Pink Floyd’s sound into their own. Sure, there are plenty of guys rocking their black The Dark Side Of The Moon shirts, but this is really more of a superficial gesture. One notable exception to the rule is the work of An Ocean Of Void from Bordeaux, France, who prove themselves to be true disciples of the Pink Floyd version of progressive rock.

The Great Escape mixes the best bits of The Dark Side Of The Moon and Wish You Were Here with the crushing heaviness of post-metal titans Cult Of Luna and Isis. There’s a melancholy feel to the music throughout, intensified by layers of synthesizers and shimmering lead guitar-lines that sound like David Gilmour himself could have written them. Far from simply imitating their heroes, An Ocean Of Void manage to build upon Pink Floyd’s foundation, and take progressive rock into heavier territory, as can be heard on “Enigma” (my favorite track of the album). Mathy, jazz-like time signatures abound, with crunchy guitars, hardcore styled guttural yelling, and occasional clean vocals, often sung just above a whisper. Despite the ferocity of the screamed vocals and distorted guitars, An Ocean Of Void’s never gets overwhelmingly heavy, and never sacrifices melody. Panopticon-era Isis had a similar vibe, with heavy passages that flowed into moments of genuine serenity.

The progressive elements don’t always satisfy, though, with tracks like “Silent Storm” and “Resonance” trying a little too hard to jazz things up at times. In the case of “Silent Storm,” when the heavy guitars kick in, the rhythm is just a little too choppy, which wouldn’t be an issue if there was a little bit more of a bass punch in the mix. “Resonance” is a ten-minute long behemoth of a song that has plenty of great moments, but the transitions are a little bumpy, with a heavy passage that quickly gives away to an honest-to-goodness elevator music-esque jazz section. The heavy moments towards the end are executed perfectly, however, and manage to put The Great Escape back on course.

An Ocean Of Void have crafted a pretty great progressive/post-metal record, and show a lot of promise. I can’t think of a single band that has ever effectively incorporated the atmosphere of Pink Floyd to the extent that these guys have, which is truly a compliment. There are some pretty heavy moments on The Great Escape, which will most likely appeal to fans of Cult Of Luna, or even The Ocean Collective. That being said, the album still wears its progressive rock influences proudly on its sleeve, and might be a bit-longwinded for heavy music fans that want something a little more straightforward. Having said that, despite a few bumpy transitions, The Great Escape can be a pretty rewarding listen, and is definitely in the “must be listened to more than once” category, as each repeated listen reveals another layer.

IN A NUTSHELL
Great effort from a band that incorporates their influences in a way that pays homage, rather than rips them off.
POSITIVES
Effectively brings the atmosphere of Pink Floyd into a progressive/post-metal context, heavy yet melodic riffs
NEGATIVES
Some of the transitions could be a bit more smooth, might be a bit long-winded for fans of more straight forward metal styles
3.5