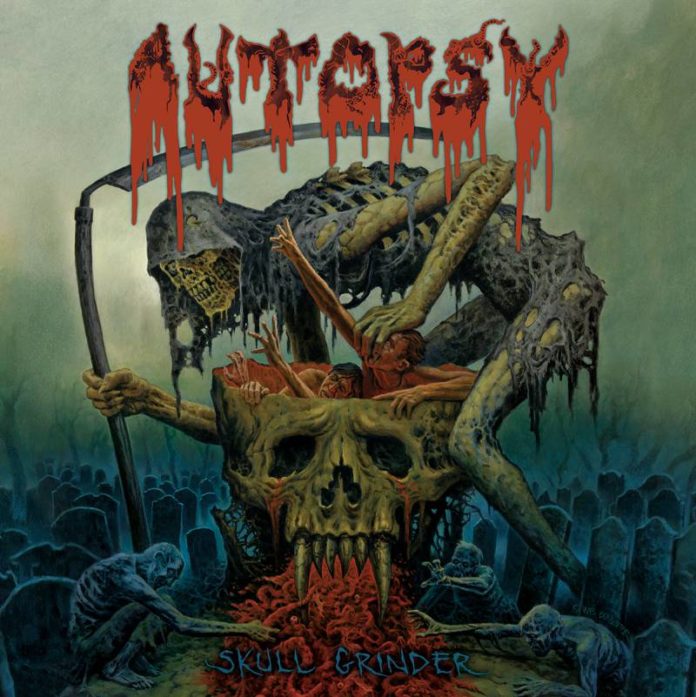 In addition to helping develop an entire sub-genre of metal, Death saw a number of its members go on to form highly influential bands of their own. In the case of drummer Chris Reifert (who was 17 years old when Chuck Schuldiner recruited him), his stay was brief, but impactful. Chris drummed on the Mutilation demo, which led to Death’s first record deal, and subsequent debut full-length LP, Scream Bloody Gore. Chris left soon after, and formed the mighty Autopsy, along with guitarist Eric Cutler, and released a slew of indispensable death metal records, such as Severed Survival and Mental Funeral. With the Retribution For The Dead EP, followed by Mental Funeral, Autopsy helped forge a new sound, that of death/doom. In slowing the pace down, Autopsy helped emphasize the heaviness of the riffs, and influenced legions of bands to follow.

Since reforming in 2010, Autopsy have been busy, putting out at least one release per year, leading up to this year’s Skull Grinder EP. In keeping with the quality the band is known for, I’m happy to say Skull Grinder is vintage Autopsy at their maniacal/twisted best. Clocking in at less than half an hour, Skull Grinder manages to give the listener a crash course in all things Autopsy, from the early thrash-influenced style that can be heard on “Strung Up and Gutted,” to the slow, doom-oriented title track. There’s a little something for everybody in here, with the exception of the punked-up style they displayed Shitfun.

Chris Reifert’s vocals are a prime example of what people are talking about when they compare death growls to “Cookie Monster” vocals. Chris sounds like he’s in the throes of a full-on feeding frenzy, sometimes to an almost comedic effect, as can be heard on opening track, “Strung Up and Gutted.” The really deep guttural qualities are all the more grotesque when you can pick out what is being growled; Autopsy are one of the earliest bands in the genre to tackle gory topics. One particularly disturbing track is “Sanity Bleeds” which consists almost entirely of guitars and vocals, the latter of which swirl in and out of the mix, creating an unsettling feeling of being trapped inside a nightmare with thousands of wailing voices.

Skull Grinder benefits from a strong production that helps highlight everything long-time fans of Autopsy have grown to love; reverb-laden vocals that give the record a distinctly old-school feel, huge guitars, thick bass, and crushing drums. The powerful riffs on doom tracks like “The Withering Death” get a slight boost in the mix, emphasizing the heaviness, while faster moments get a thorough reverb drenching. Despite the amount of reverb, there’s no loss of clarity, which helps Autopsy keep one foot stepping into the future, while having the other planted firmly in their roots.

Skull Grinder should be in any self-respecting Autopsy fan’s collection (or fans of death metal in general, for that matter). If there was anything to complain about at all, it would be that the fun is over too quickly; with only 7 songs and clocking in at around 28 minutes, Autopsy leave you wanting more. Really, though, that’s a compliment to the band’s ability to craft a thoroughly enjoyable record, and I can say with confidence that I look forward to seeing what else they have up their sleeves.