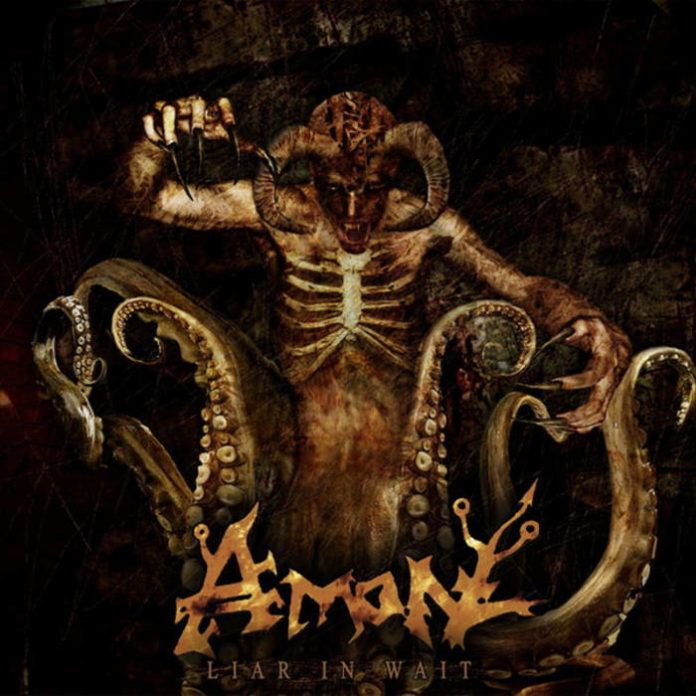 What do you think of when someone mentions the band Deicide?  Is it their propensity for all things anti-Christian?  How about their influential and legendary albums “Legion” and “Deicide“?  Maybe it’s that Glen Benton has always been known to be a complete dick?  I could keep going on about the things the band brings to mind, but to me I immediately think about the Hoffman brothers, Eric and Brian.  The messy break up between them and Glen Benton was highly publicized in 2004, and we kept hearing from both camps how bad things had gotten.  I wondered what was going to happen with Brian and Eric, but in 2007 they brought back their pre-Deicide band, Amon.  The group released a new song called ‘Among Us’ this past Halloween, and almost eight months later came the release of “Liar In Wait“.  Once they had been the undisputed kings of death metal riffs, and now they are back to try and reclaim their throne.

The Hoffman brothers are joined by Jesse “Jocheal” Jolly (bass/vocals; ex-Success Will Write Apocalypse Across The Sky) and Mike Petrak (drums; ex-Success Will Write Apocalypse Across The Sky), and you can immediately hear this new blood in Amon come at you fullbore in the opening track, ‘Among Us’.  The ferocity and speed Amon shows has already bested everything Deicide has released in the past 12 years.  While the track itself is good, it really doesn’t blow me away until the very end with the tapping lead.  So, what does that mean for the rest of “Liar In Wait“?

It means that ‘Among Us’ is just a tease for what was to come.  Once ‘Eye of the Infinite’ takes off with its harsh tone you are instantly hooked.  Everything from Jocheal’s deep growls, Mike’s one-handed drum rolls, to the Hoffman’s trademark riffing is gold from beginning to end.  If I had to make any type of comparisons, I would say “Liar In Wait” is a mixture of “Legion” and “Serpents Of The Light” in being able to combine those grotesque melodic leads with extreme precision and intense speed.  However, while those comparisons may be appropriate, Amon are doing original compositions that never would have made the cut in Deicide, such as the entirety of ‘Liar In Wait’ and ‘Semblance Of Man’.  This lends the band to finally step out of Deicide‘s looming shadow and show the world that they will not be cast down by the endless comparisons.

Amon‘s production is absolutely stellar.  There is nothing that could have gone better for the Hoffman’s than to have the razor sharp tone they do.  There isn’t one note that sounds out of place nor weak, which in turn creates a perfect atmosphere to hear their blasphemous return.  Mike’s drums are not over-powering and help the music move forward, and even sets up some really heavy portions.  The only thing that I wish were different was Jocheal’s bass.  As usual in modern death metal, it is completely non-existent.  Speaking again of Jocheal, while I think his vocals are better than what Glen Benton does now, he still doesn’t hold a candle to what Glen could do back in his “Legion” days.  His growls can get old at times and makes me wish for some more variance, but that is where the backing screams come in.

For years I have been saying that the last few albums Deicide has release are completely worthless, with the last one in my eyes being “Insineratehymn“.  However, it is time for a new group to knock Deicide off their boring high horse and help make them realize that losing the Hoffman brothers was a fate worse than death.  Brian and Eric’s tenacity is something that should not have been underestimated, and I am sure that even Glen Benton himself couldn’t argue with”Liar In Wait” beating the absolute piss out of everything he has contributed to the world of death metal in the past 12 years.  It amazes me that right now Amon is without a label to call home.  I am not sure why that is, but every single label that dabbles in death metal are fools for not picking them up.  Amon is back with a vengeance, and I eagerly await for new material.