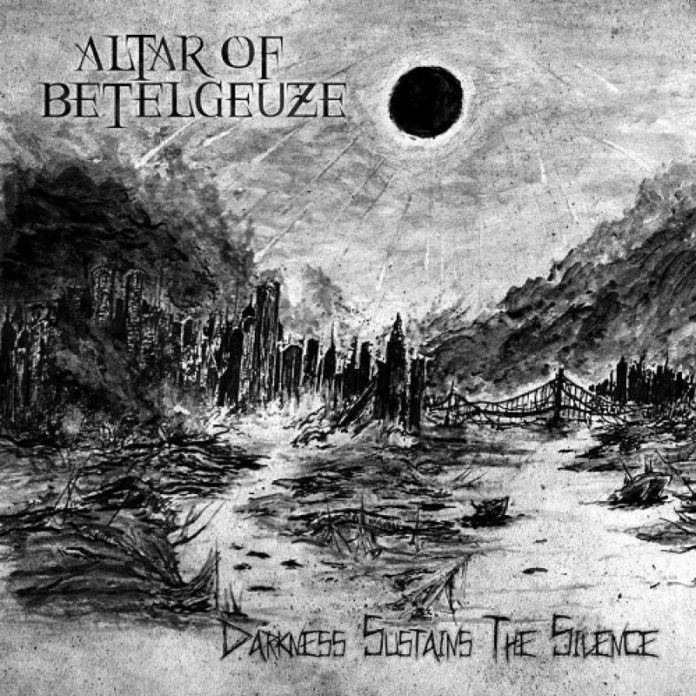 The aspect of doom and sludge metal that’s always drawn me into it is the fact that there aren’t very many rules as to how to do the genre “right.” Unlike the restrictive commandments of orthodox black metal, doom and sludge provide a lot of space for the artist to do whatever they want with a very broad formula. Take The Body’s incorporation of horns and choirs into their aural nightmare, or Eagle Twin’s throat-singing vocal inspirations to get an idea of what I mean; doom has plenty of room for the creative mind to run wild. And while the first album from Altar of Betelgeuze isn’t as left-field as the previous examples, the members of the band have found a lot of space to carve themselves out a comfortable little niche.

As a first album, Darkness Sustains The Silence does a phenomenal job at displaying the band’s ambition, talent, and scope of composition. Each member of the quartet gets a chance to take the spotlight with some impressive fills, but they never let these moments lag into masturbatory territory. The band gels together on some powerful and memorable moments throughout (“A World Without End” and “Smoldering Clouds Above Orion” are particular highlights), and they’re able to keep your attention for a single 22-minute closing suite in three parts, which is not something you can say of most doom bands with only one album under their belt. For the most part, Altar of Betelgeuze are striking a surprising amount of gold on their debut release, considering they touch upon elements of hardcore, black metal, and punk alike. But as with any album that features a lot of experimentation, some of the experiments tend to fizzle out instead of creating a nice eyebrow-crisping bang.

The spoken-word passages that pop up throughout the album sound more goofy than anything else, but isn’t that true of a spoken-word passage that any band has done? It takes skill to make them work in the middle of a song, and it’s a skill that these guys haven’t developed just yet. The production on the album could have been a bit punchier, particularly the drums, and a bit more atmospherics would have gone a long way – there’s hints of this on “Smoldering Clouds,” where a faint throat-singing drone provides a bedrock for an awesome display of bass-noodling, but more moments like this would have really brought this record above the fold. The biggest misstep comes with the song “Steamroller,” a robust piece of demolitions equipment which ends up stuck going in circles. It remorselessly crushes the same small amount of space for too long of a time, and its cock-rocky lyrics also single it out as the black sheep of the album. And not a particularly worthwhile one, at that.

But aside from a few minor flops here and there, what we have on Darkness Sustains The Silence is a lot of potential from a promising new band. A bit of refinement and polish on the next release will ensure that Altar of Betelgeuze are a band to be not just witnessed, but worshiped. It’s a great start to a new band’s career, and a great way to kick off another year of heavy metal.