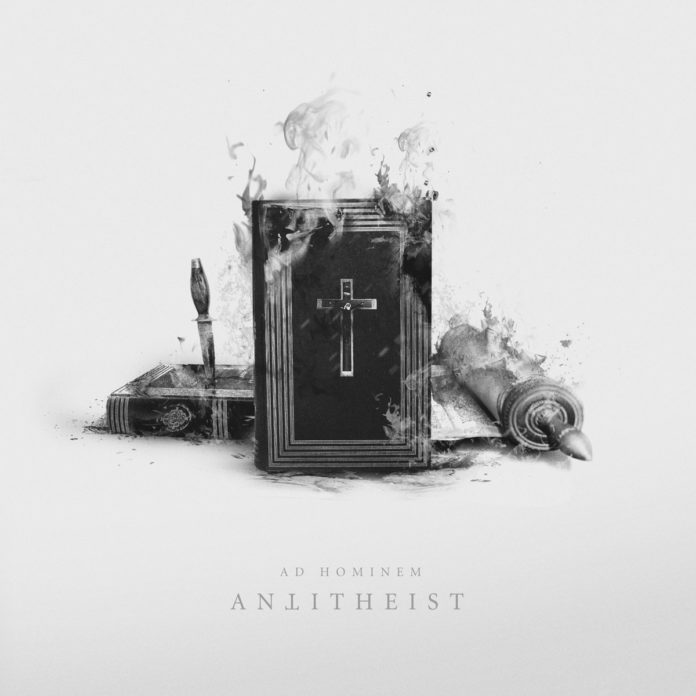 Aptly fitting in with its country’s history of literary and cultural infamy, French black metal has often framed itself as a genre for transgressors. Between the likes of Peste Noire, Deathspell Omega, and much of the Les Légions Noires collective, French BM has always had a knack for taking the European fascination with religion and the occult, turning it on its head, and injecting it with offbeat, deviant, and satirical takes on the social and political issues faced in black metal. Ad Hominem are no different. Antitheist, their fifth LP, serves to continue this sordid tradition (and celebrate their fifteen years together), by delivering an all-out attack on organised monotheistic religion.

While the whole record initially suffers from some damagingly-flat production values, the instrumentals have more than enough elbow grease to punch through the plastic, clean sound. Antitheist is beclouded by a bleak, overcast atmosphere that permeates it with a sense of explosive enmity. Vocalist/bassist Kaiser barks each virulent lyric with enough tempestuous force that you can just about hear the venom spitting from his mouth. The band delivers a multitude of vehement cries to cleanse humanity through death and disease, mocking religious figures through parodical sexual deviancy and incisive images of radical anti-religious violence.

While it’s remarkably easy to criticise a band that characterises themselves on shock factor alone (see my Marduk review from earlier this year), the variance in the instrumentals on Antitheist  show that the band has far more bite than bark. Taking more cues from thrash, and even some deathrock vibes, the band manages to infuse their sardonic cuts into religion and society with powerful, pummeling percussion, and guitars that trade off between serrated and punishing, to brooding and gothic. Even if the radical anti-religious messages come off as caricaturistic most of the time, Ad Hominem have pieced together a surprisingly gripping and intense record..