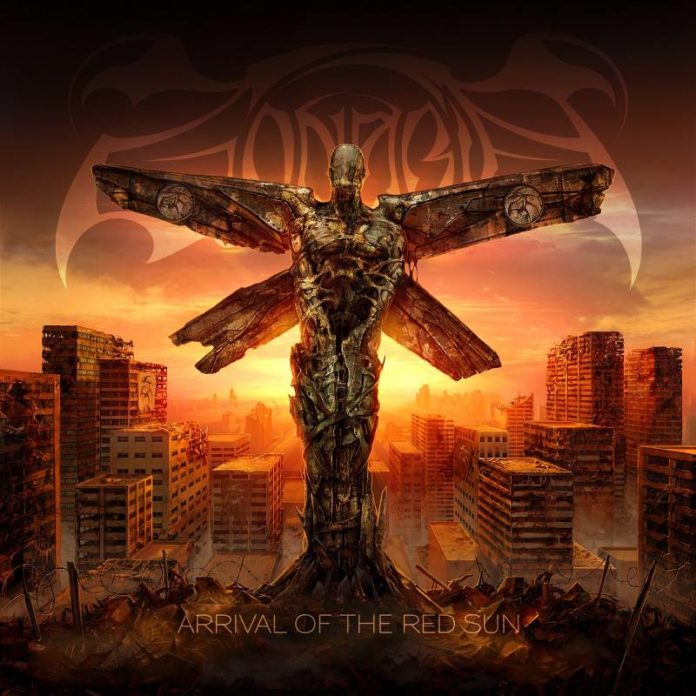 Arrival Of The Red Sun wastes no time making an impression; the opening riff on the song “Arrival Of The Red Sun” is probably one of the most memorable ones on the album. In fact, from start to finish, Arrival Of The Red Sun is chock full of catchy riffs that you’ll probably remember for some time. Zonaria seems to take their musical cue’s from standard melodic death metal; think more in the sense of Scar Symmetry  and less like Soilwork. If you like either of those bands, you’ll probably like fellow country mates Zonaria. The guitars on Arrival Of The Red Sun are probably the best thing about the album; that’s both a good and bad thing (mostly good) and I’ll discuss why for a bit up ahead. The vocals are also rather good, although a little more variety would have been nice.

So if the guitars and vocals are good, that only leaves the drums. Unfortunately, I can’t sing the same praise for the drumming that I did for the guitar work. Drums on Arrival Of The Red Sun, while never truly terrible, are just mostly forgettable. I can’t really remember a single thing they did that was interesting on the album, which is really a shame especially when you compare them to the guitarwork (which, again, is stellar). It certainly isn’t the end of the world though; they might be disappointing but they don’t really take anything away from the album itself. Speaking of the album; as a whole it flows rather nice. It mostly avoids dragging on by virtue of only being around 40 minutes long, and also having genuinely well-written songs. They’re only one or two songs on the album that you’ll think about skipping midway through, one of the offenders being the song “A Lullaby For Those Still Alive” which has the unfortunate job of following up two rather strong songs in a row.

For the most part, Zonaria did an okay job on the production for this album. Everything sounds sufficiently meaty; those “forgettable” drums at least have a satisfying thump to them, while guitars seem positioned well in the mix. Listening to the album over speakers is fine, but when you put on a good pair of headphones things tend to fall apart a bit. Vocals suddenly sound a bit buried; while some of the highs on the album are quite harsh. Check out the guitar trailing off in the background of the chorus in”Full Spectrum Dominance”; it comes across as rather scratchy, irritating, and just plain old annoying. Luckily they’re aren’t that many highs on the album, but when there are it’s rather grating.

I have a feeling that if Zonaria didn’t take four years in between their last album The Cancer Empire and Arrival Of The Red Sun, they might be a bit bigger in the metal universe. As it stands now, they basically fell off the map after their last release in 2008. If they can keep up a steady stream of releases while also improving, I think we’ll start seeing them get mentioned in the same breath as Soilwork and Scar Symmetry. They certainly have the songwriting chops for it.