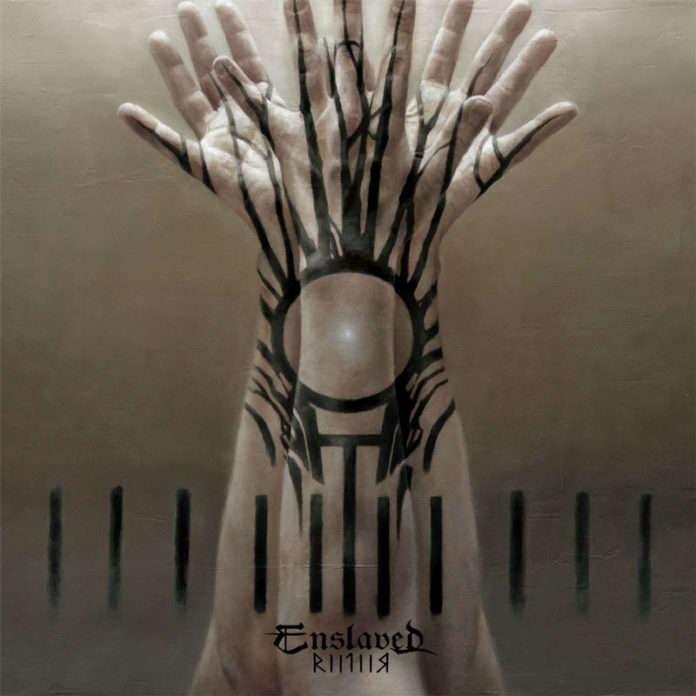 Enslaved’s last full-length album, 2010’s Axioma Ethica Odini, was a strong but flawed record – the strength being the sheer power of certain passages, and the flaw being that they were often repeated to the point where they lost all impact and dragged out the song needlessly. Despite its problems, it got me excited for where the Norwegian prog-black metal five-piece would go next, and now it’s two years later and they’re back with the unpronounceable RIITIIR (2011’s The Sleeping Gods EP doesn’t really count). And it turned out I was right to be excited for the future of Enslaved a couple of years ago, because it’s a fantastic album that manages to cast off every problem its predecessor had. Less repetitive, more awesome.

The album kicks off with “Thoughts Like Hammers”, which is based around a recurring riff that takes on several forms throughout the song’s nearly ten-minute runtime. Where previously this riff would’ve been run into the ground, it instead serves as an anchor the band returns to after venturing off into strange territory, whether prog or black. The now-signature Enslaved tradeoff between clean and raspy vocals appears in full force, as various harmonies, time signature changes and clean passages are navigated. Enslaved are clearly stretching their legs here. After “Thoughts” comes “Death In The Eyes Of Dawn”, which made my shortlist of best songs of 2012 after a scant 20 seconds, that opening riff is that good. The song captures an incredible sense of epic atmosphere as it addresses a man at the end of his life awaiting a glorious afterlife and wondering where his final reward is. Featuring an epic, soaring chorus and a fantastic guitar solo, the track moves into a pummeling, shifting meter passage that proves wrong the claim that old-school prog and black metal can never intersect. The song comes to a close with an acoustic outro that left me wondering how that song could possibly be topped.

Fortunately, Enslaved haven’t played their whole hand yet; “Veilburner” and “Roots Of The Mountain” offer plenty of pleasant surprises. The former begins with a corridor of riffs; the bass and two guitars diverge and reconnect for a NWOBHM-ish verse before twisting down double-bass fueled dark tunnels. Abruptly the latter starts with a blast of metal fury; ordinarily I’d criticize an ostensibly “extreme” band for waiting nearly half the album to rip my face off, but the songs to this point are so strong that it only makes the intro of “Roots” that much sweeter. The body of the song doesn’t disappoint, either – a flute and mellotron interlude punctuates the tradeoff between vocalists Grutle Khellson (bass) and Herbrand Larsen (keys) as guitar acrobatics weave in and out of the growing dynamics. This is about as Viking as it gets, and there’s even mandolin to boot! These Norwegians know the way to my heart.

The following tracks are no less plentiful with solid ideas – “Materal” channels some of the Pagan feel Axioma Ethica Odini featured at times and has a completely ridiculous solo, and “Storm Of Memories” has a humming bassline beneath a Maiden-esque opening riff, but with lots of keyboard for added creepy texture, before a melancholic, black metal passage complete with tremolo guitars and blast beats. Closing epic “Forsaken” brings things to a finish with a mixture of clanging piano, epic riffage and experimental electronic passages. All in all, this is the rare record where I don’t find myself skipping to certain tracks, because every song has something great to offer.

The vibe I get from this record is that Enslaved 2012 are comfortable being masters of their craft, living legends in their own genre, who will happy continue cranking out great albums like RIITIIR for the foreseeable future. Their experiments are always tightly planned and never out of place, and their metal instincts are still as sharp as ever. Look for this record on a lot of best-of lists at the end of the year…including mine.