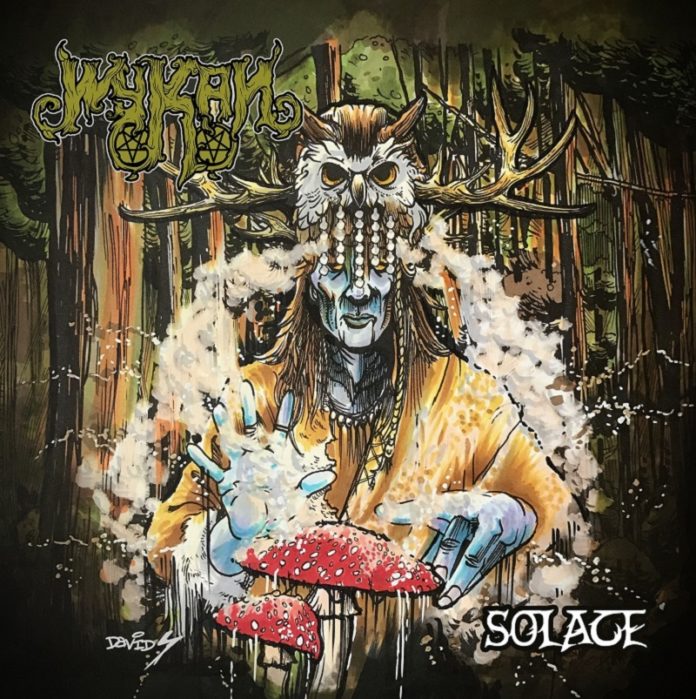 In an EP that only packs three songs (although fairly long ones), Wykan have presented a very interesting showcase of their talent and range. It is this desire to showcase what they are capable of, however, that represents Wykan‘s biggest challenge.

Starting with the very psychedelic stoner and blues-infused “Lahppon Olmmos,” followed by a blackened doom anthem in “The Gathering”, and ending with an unholy mixture of everything in “Wykan”, Solace can seem like it’s all over the place. Indeed, as I listened to the album I often found myself unable to parse the songs together as a whole. It is not that the songs don’t work on their own, but rather that they seem too isolated from the rest of the work. While, individually, the songs are undeniably good, the movement from one song to the next seems awkward, as if they were never really meant to be together in the first place. In fact, there seems to be a clear separation between the first track and the rest, as the psychedelic traits of Wykan‘s music seem to give way to the black metal aspects of their identity.

All of the above does not mean that this is a bad release. On the contrary, I actually enjoyed listening to it, although I was slightly annoyed by the fact that the songs seemed to drone on longer than was necessary (as seems demonstrated by the fact that all of them resort to just fading out instead of having an actual ending). It was this enjoyment of the music that really made frustrating to see that such a talented and promising group of musicians did not seem able to create songs that work with each other, instead of only in isolation. The songs are good on their own, but it does not look like they’re ready to make it as team.

An interesting showcase of talent, but still not ready to be an album.
Reader Rating0 Votes
Trance-inducing
An interesting mix of blues, black metal and psychedelic rock
The songs don't necessarily work well with each other
There's a lot of fat to be trimmed
3.5