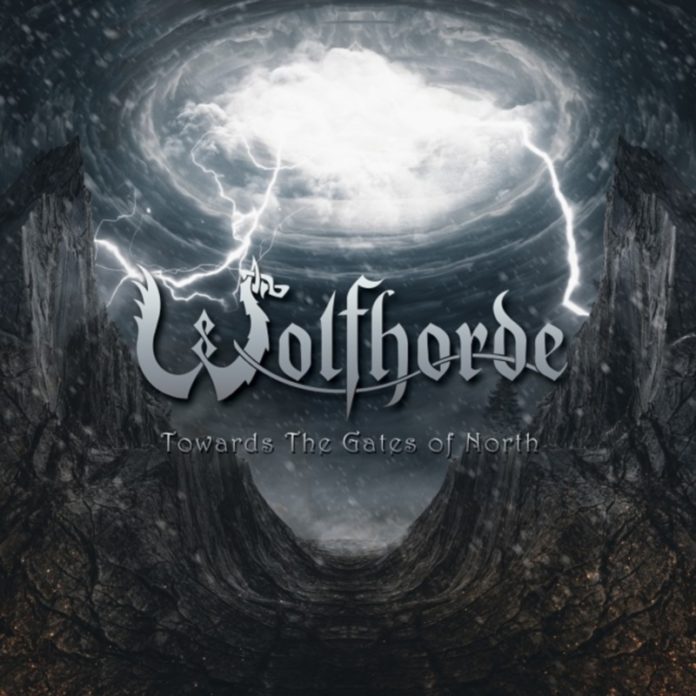 Coming all the way from Finland, Towards the Gates of the North is Wolfhorde‘s first full-length (despite a series of EPs and singles released since 07), and continues with the band’s medieval/folk twist on metal, complementing the war-ship design of their logo. The balance is firmly in favor of the metal, so fans of Corvus Corax and similar period-recreation acts may feel a little let down once they make it through the first few tracks.

Piano, horns, harpsichords, flutes, and assorted other instruments lend the music its ren-faire flair, and the requisite electric guitar only comes in once the less common elements of the music have been well-established. Once it does, though, it’s definitely there to stay. Prominent use of counter-point and staggered rhythms helps reinforce the album’s off-beat aims, and while the growling vocals are kind of staid in comparison to the more eccentric efforts, the two sides work fairly well together. On the down-side, it feels as though the world music aspect gets subsumed fairly quickly by the regular metal, reducing its influence on the music to just a garnishing of novelty.

There’s also some muddiness in the mixing; not enough to really harm the music, but enough to make things seem kludgy when the band goes for big, multi-instrumental crescendos. And Wolfhorde do go for those, with a frequency which has the clumpiness of the production standing out noticeably by the halfway point, if you pay attention to that sort of thing. Semi-luckily, the muddling generally only affects the mid- and low-range of the register, so the keyboard trilling gets to float over the weightier stuff without too much tarring.

Overall, it’s something of a rough run, but the band comes off as pleasantly ambitious in the way they structure their songs. The parts which do feel sort of lackluster give the impression of being that way due to a shortage of time for putting the album together, rather than a flat inability to come up with something better. Having said that, looking at the amount of teaser material put out in advance of the album’s release has me second-guessing myself on that. While there’s just a handful of moments which make the band’s awkward musical juggling act really spark to life, those moments point towards something worth developing.

To me, it seemed as though the band hit its stride best when they went firmly towards one side or the other with their music, as with the staunchly metal onslaught of “Lycomania” and the Nordic overture of “Vegvísir”. On the other hand, trying to find a happy medium uniting the different styles is most of what helps the band stick out from the mass of metal acts at this point, so I am curious as to how they’ll develop that synthesis on future albums. While this is not a firm recommendation, there’s definitely some quality to be found here.

IN A NUTSHELL
Not the most compelling Nordic metal that's out there, but it does show promise for future efforts by the band
POSITIVES
Good use of rhythm, the musicians play well to each other, and the medieval coloring is used without being overpowering
NEGATIVES
The band seems a little unsure whether they want to emphasize their metal or medieval flavors, the moments that could be their strongest are marred by muddy mixing, and a fair amount of the songs could stand to be trimmed down to get to the stronger parts sooner
3