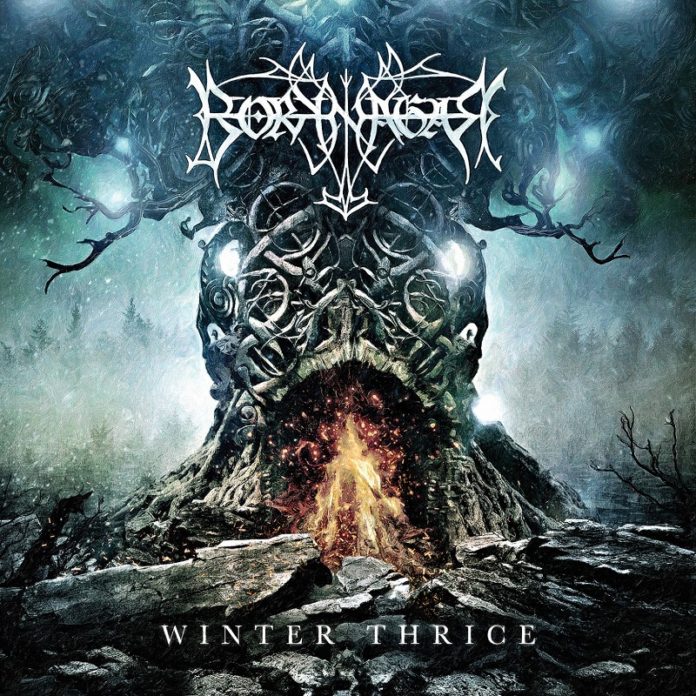 Since bursting onto Norway’s black metal scene in 1996, Borknagar have continually pushed the sonic boundaries of the genre. Starting as early as the band’s second album, The Olden Domain, they began crafting a melodic approach to black metal, with hints of progressive. Despite numerous line-up changes, Øystein Garnes Brun, the sole founding member, has managed to keep a pretty consistent output of material. Joined by famed Swedish vocalist Andreas “Vintersorg” Hedlund in 2000, they have continued to break new grounds in the genre, adding elements of folk, viking, and progressive metal into the mix to greater degrees with each release. This year marks the 20th anniversary of Borknagar’s inception, and what better way to celebrate such a milestone than a new album?

Winter Thrice sees the band plowing ahead even further into progressive territory. Borknagar may have started as a black metal project, but within seconds of the opening track, “The Rhymes Of The Mountain,” it’s apparent that Øystein and co. have much loftier ideas in mind. Choral vocal arrangements and soaring, melodic guitars come blasting out of the speakers, with the kind of intro that wouldn’t be out of place on a Blind Guardian record. Vocally, the clean singing mixes well with the black metal growls, just as the speedier black metal riffs mix in with the progressive lead-guitar work and epic keyboards. Vintersorg and Simen “ICS Vortex” Hestnæs both shine in the vocal department, with Vortex‘s clean vocals sometimes taking on a slightly higher pitch than those of Vintersorg.

The talent of the band’s members is perfectly demonstrated by their ability to handle the transitions between styles this smoothly. “When Chaos Calls” is a perfect example of this, being a perfect blend of progressive and black metal, with minor keys and time changes. “Terminus” is the closest to a straight-forward black metal song, with blasting drums and tremolo-picked guitars, but even this track plays around with time-signatures and clean vocals.

The production couldn’t be more perfect for this release, and makes each new listen of Winter Thrice a unique experience. Each track has a lot going on in the mix, with multiple layered guitars, keys, and vocals, and yet nothing comes off as too busy. There is still plenty of crunch in the heavier sections, and Vintersorg’s growls are given a good boost when they’re needed to create the blackened atmosphere. The quieter moments are also given plenty of space, with melancholy guitars and keyboards taking the forefront in the mix on tracks like “Erodent.”

Borknagar have put out another fantastic record, and a fitting addition to their 20 year career. If you’re looking for Borknagar 2.0, this isn’t the album you’re looking for, but if you like the direction the band has been heading to, rejoice, for the Northern Gods have graced us with another masterpiece!

IN A NUTSHELL
Ever forward-thinking, Borknagar continue to push extreme metal into exciting new territories with their latest release.
POSITIVES
Solid production, expert musicianship, perfect blend of metal styles
NEGATIVES
Fans looking for a more straight-forward black metal sound might be turned off by the heavy use of progressive elements
5