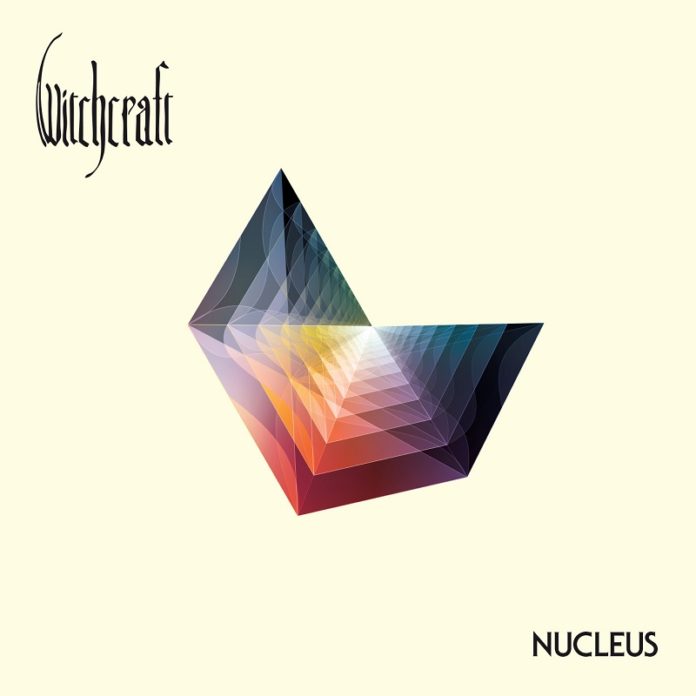 Nucleus is the fifth studio album from the Swedish group Witchcraft… not to be confused with the Hungarian group, the Finnish group, or any of the other couple dozen bands by the same name. This time the trio, with new members Tobias Anger and Rage Widerberg, brings a big show, packing an hour and ten minutes worth of material into their CD (or double LPs, if you swing that way), covering a wide range of styles and durations. There’s the quick ~2:30 run of “Theory of Consequence”; a handful of songs in the 4- to 6-minute slot; then big, with a pair of ~8:00s (one of which opens the album, in a ballsy move), and bigger, with a couple of ~15-minute heavy hitters towards the middle and end allowing Witchcraft to really spread their wings.  While giving first mention to the run-times is admittedly kind of superficial, it’s something that I expect will jump out at many first-time listeners, so it seems like a reasonable place to start.

Along the run of these size-shifting songs, the band shows its chops in the realms of heavy rock, traditional doom, psychedelic (more Jefferson Airplane than The Fifth Dimension), hard rock, blues, light touches of folk rock, and little splashes of pop to the melodies and hookier riffs. Guitarist/founding member/vocalist Magnus Pelander has firm placement as the central figure with his singing and picking, but he makes good use of his band-members’ talents, with a tooth-vibrating buzz of bass here, hard-hitting drum riffs there, and a persistent sense of unity as the three of them bring their tracks to life.  Even better, all of these grow stronger over the course of the album, with finishing track “Breakdown” displaying a turbulent assemblage of the turns taken from track to track.

The production has a retro ’70s warmth to it, but with that comes some slight blurring of the audio edges; guitar chords sounding slightly muffled, for instance, or the drums lacking a bit of the treble presence they should have.  The tone is well-suited to the blend of musical styles in which the band indulges, but that doesn’t really save it from the effects of these short-comings.  Then again, more clarity and sharper contrast doesn’t seem like it would do many favors to the music, so it’s something of a wash on that aspect.

The bluesier sections meshed with the hard rock or doom lead to a vaguely Danzig-like atmosphere, though generally more upbeat and optimistic in attitude; also, the sprawling long-form tracks churning through the various styles in intriguing combinations really justify the length of the longer tracks. As a tribute to/near-worship of the heavier side of oldies rock, it’s much more effective and authentic-seeming than the latest stuff from, say, Kadavar or The Sword.  And there are some nicely fiery rips of shredding and noodly soloing from the guitar, though these tend to cut off before they can really establish a grip on your head/neck/rest of your body; instead, it’s the slow grooves which get the room to grab hold.  Still, it’s a remarkably well-crafted album, with plenty to dig into once you get through the first play, and a great release with which to kick off the new year.

IN A NUTSHELL
If you're looking for a modern band paying tribute to the work of decades past, this one should have high priority on your list of stuff to check out.
POSITIVES
Some inventive stylistic blending, lively playing, good atmosphere, firm rock.
NEGATIVES
A little too tied to old forms in the album's first half.
4