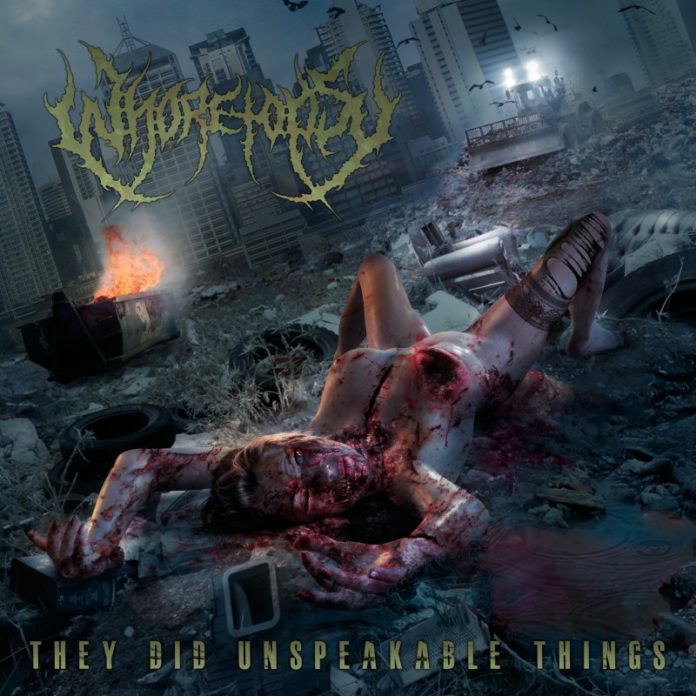 Being a newer group from Australia, home to horrifying man-eating insects and ravenous hellbeasts known as koala bears, Whoretopsy tries their hand at the art of crafting a memorable and respectable selection of brutal death metal that would be just as terrifying on their debut full-length “They Did Unspeakable Things“.  So far all the band had put out was a three song demo (which all three songs make an appearance on this album) and I thought they certainly had potential, but there were still glaring issues that needed fixing.  With an abundance of bands these days just wanting to emulate their predecessors, in every way, particularly when it comes to slamming brutal death metal, so let’s hope that Whoretopsy are able to break the mold.

Honestly, I have been trying to rack my brain about how to even write this review for the past few months just because there is so little to say about it.  “They Did Unspeakable Things” is quite derivative of the usual brutal death and slam mixture and there really isn’t anything else other than that.  However, there are a few things that Whoretopsy does make their own, namely the few melodic leads they placed on tracks like ‘In Loving Memory’, ‘Bittersweet’, ‘Cardiac Defecation’, ‘Potty Mouth’ and ‘Human Error’.  I found myself enjoying ‘In Loving Memory’, ‘Potty Mouth’ and ‘Human Error’ the most as they were pretty varied and took some chances, while the rest of the music tends to languish in its own fetid mediocrity.  Although I will throw Matt Stormer a bone and say that his vocals were what I enjoyed the most throughout the album.

There were other minor annoyances that would begin to add up as “They Did Unspeakable Things” dragged on.  Allow me to present them in a bullet list:

I understand that it is pretty difficult to come up with wholly original material these days, and while there are some groups who can take that continuously copied style and do something magnificent with it, “They Did Unspeakable Things” is not one of them.  Whoretopsy tried their best and there were some positive results that came out of it, but overall they are mauled by repetitive ideas that we have all heard before and done better.  While my words may be quite harsh to Whoretopsy, I implore them to not give up and try harder to set themselves apart from the rest of the herd because it is in their best interest for survival.