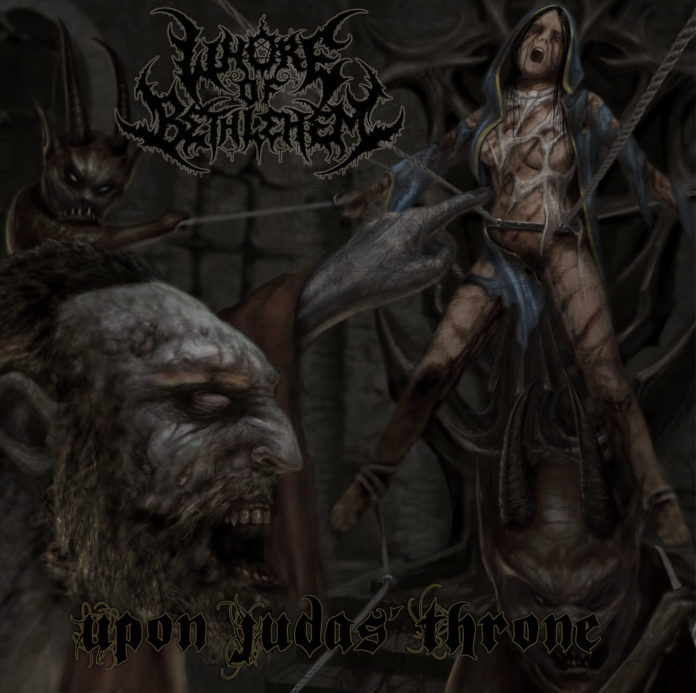 Extreme metal is impossible to define. It seems to include pretty much anything harder than melodic death metal, including some types of thrash, death metal, black metal and grindcore, pornogrind and all that stuff. Whore of Bethlehem occupy an interesting space in this genre, defying some conventions, while falling squarely into others, combining some elements of black metal with plenty of death metal power.

One of the first things that caught my attention in Upon Judas’ Throne is the desire on the part of the band to insert changes of tempo and rhythm into some of the songs. While this pseudo-progressive elements can be positive, the truth is that they fail in the execution, and produce just a very cacophonous mixture of sounds. It often comes off as if they just got lost mid-song and tried to continue playing anyway. While the music is definitely very powerful, and has all the necessary elements to induce some headbanging-related concussions, the completely unexplainable changes really affect the whole experience (“Christ Crusher”, for example, really had me going until it went into those goddamn changes and completely killed my immersion).

The band reminds me a lot of Daath, particularly in the vocals department (where they show some often interesting changes from high pitched shrieks to low pitched growls), although they are not nearly as melodic. This caveat is not necessarily a bad thing, since I don’t think Whore of Bethlehem were looking to be seen as a melodic band anyway. The production is excellent for what the band tried to achieve, and it truly conveys the sense of power and malevolence that, I think, Whore of Bethlehem were aiming at producing; while the bass is, sadly, buried in the mix, this seems to be a common denominator in the genre anyway, so I’m reluctant to hold it against them, particularly when considering that this is an independent release.

Upon Judas’ Throne is an interesting album, but far from excellent. It has all the elements of a neckbreaker, but also many of the problems that you’d expect from the debut album of such a young band. These Texans have all they need to make it big in the extreme metal underground, they just need to be a bit more focused on what they put out.