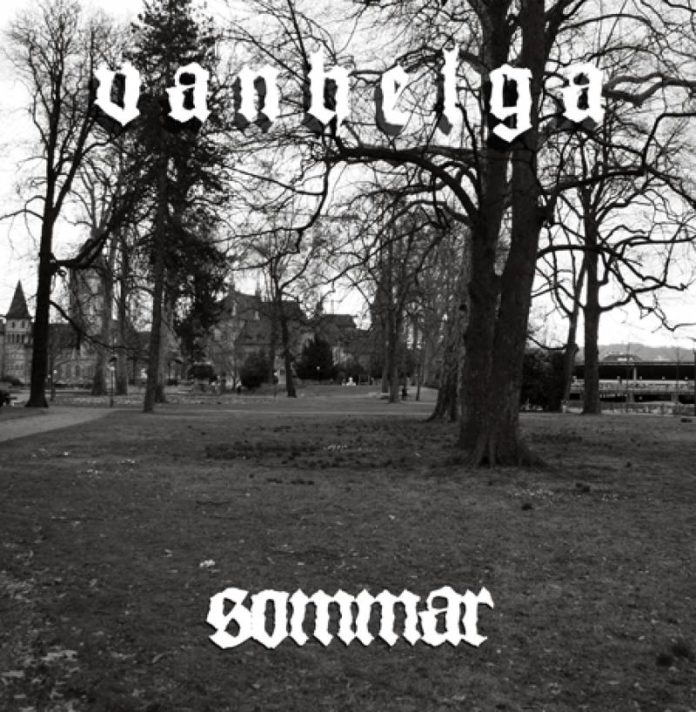 It’s always great to be able to check out an album from a band I’ve never heard of before: especially when the record is surprisingly good. Hailing from Sweden, Vanhelga have been relentlessly releasing material since 2009 (despite having been formed over a decade ago) in the form of albums, EPs, demos and even a split with Morbid Frost, Omen and Vinterslav. If you’re aware of any of those other bands you might already be enticed to check the band out; if not, read on, you probably will be.

It’s really quite difficult to pinpoint a genre for Vanhelga; while it’s obviously Black Metal, there’s a lot more to it than just that. Whilst the material itself mainly comes across as Post-BM, the production screams early 90’s trueness, kind of like a modern day Filosofem. I’m always impressed when a band creates a really haunting atmosphere without relying too heavily on the overproduction of the record; too often bands use the production to do the work that the material itself should be doing on its own, so Vanhelga certainly deserve some bonus points for that.

Sommar has the rawness that most BM fans want, coupled with the desperate sadness of the later day bands like Wolves in the Throne Room or Woods of Desolation. Switching between these two styles effortlessly, and without becoming disjointed, you have thirty minutes of something quite special here. There is also a bit of a droney, Xasthur/Leviathan type mood shining through at certain points… although I’m not sure whether that’s just the one crash cymbal being much louder than practically everything else.

While we’ve been through the basics of Sommar, there is something that’s really obscure about this album, even for Black Metal. It’s no secret that these bands like to throw in sections of other genres (discordant jazz seems to be the favourite in the bands I’ve been listening to lately) but here it sometimes seems like the drummer is listening to The Prodigy in his headphones, throwing in the odd ‘dance’ beat here and there, as in “Välkommen In”. All of this coupled with some strangely happy riffs that wouldn’t be out of place in the latest Kerrang-produced band, like in “Another Side (Of me)” there are a few moments that are highly questionable. I think they maintain the integrity of this album by, in a way, managing to make these parts sound like carnival music; it sounds happy enough, but you know that there’s something really horrible about it that you can’t quite put your finger on. Somehow it all fits together really well, I’m not even sure how they managed it… Maybe that was the Vanhelga master-plan all along?

The vocals are probably the shining light amongst all the aspects here. Cold and necro throughout, they range from the pained, high pitched screaming, through to incoherent mumbling. They explore all of the different styles that really add that tortured feeling that is imperative in this kind of album. Perhaps the input of Johan Gabrielson (or 1853 or whatever it is that he wants to call himself) is to be credited for that; after all, you’d be hard pushed to find a more desperate sounding band than his ironically titled claim to fame, Lifelover.

This is a great EP that probably won’t get anywhere near the recognition it deserves. It has its own original spin on many different aspects of Black Metal, whilst remaining true to all things that make BM what it is. Miserable, isolated and despondent.

Sounds good? Fuck yeah it sounds good. Make sure you give this record a chance.